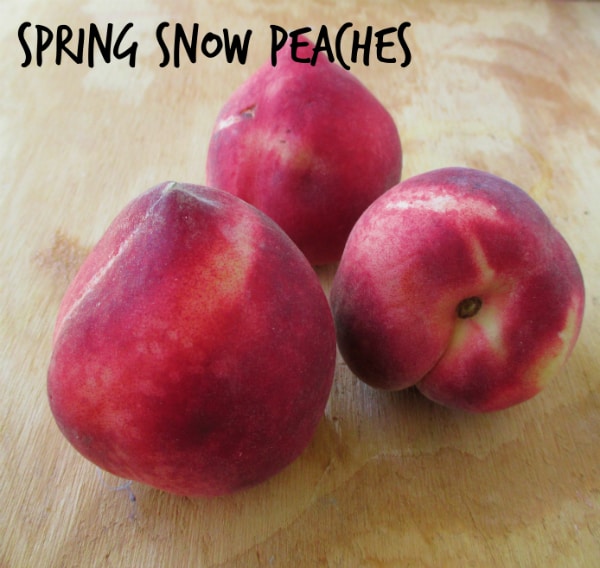 I love when I get to bite into that first peach of the season. Especially after a long drought without them. It’s like running into an old good friend that you pick up right where you left off. Typically peaches disappear in the winter time, with the exception of some peaches from Chile, which this year I never had as supply was low along with my interest. I have yet to have a good peach shipped from that far away. When May hit I was excited to see the California peaches begin to show up, especially those from one of my favorite growers, Kingsburg Orchards (known for their Velvet apricots and Strawberry Heirloom peaches). I found several pieces of their stone fruit recently and wanted to share with you some of my thoughts.

Spring Snow is an early season white peach that is clingstone (pit sticks to the flesh). It is the 2nd earliest white peach grown by Kingsburg, after the Snow Angel peach that I reviewed a couple years ago. Spring Snow is not exclusively grown by them though. I find this variety to be the first one you see on a wide scale at most supermarkets. Check your boxes or ask a produce worker if they are them.

Overall Feeling:
Spring Snow is the first good peach I had this year. It’s a nice way to start the season. It’s not as super sweet as other white peaches I may have later in the year but it has some acidity to it, giving it a more rounded flavor. It was plenty juicy, I would not be able to enjoy while typing this post. A good solid peach to get wet my appetite for what it to come over the next few months. Look for it in stores in mid to late May.