Alton Brown refers to the peppercorn as the King of Spices. And it truly is.

What is the most commonly used spice in  American kitchens? There is no competition to the peppercorn.

In this post, I am going to cover all things peppercorns: what it  is and what types are out there.

This is the original image I used in this post when it was first published in February 2010. I did a major update in September 2018 with new information and all new photos. I wanted to keep this one around for nostalgic. Plus I still like it. Pictures from left to right – pink peppercorns, schezuan peppercorns, smoked peppercorns, green peppercorns, black peppercorns, white peppercorns

Peppercorns are the fruit of a vine called Piper Nigrum. You can find this vine growing in Asian countries with warm climates  like India, Malaysia, and Indonesia. European countries spent years trying to find better spice routes to these lands to get their pepper fix. Actual wars were fought over peppercorns.

Peppercorns contain violate oils. When you crack them the oils are released and they flavor your food. Once cracked the oils will begin to dissipate, which is why you don’t want to buy ground pepper- you want to grind it yourself.

There are different types of peppercorns available. They differ based on the way they are harvested and then treated. Below you will find all of the peppercorns that are Piper Nigrum.

By far the most popular, black peppercorns

are picked before they berry has fully ripened. They are then allowed to dry in the sun. Oxidation then takes place which turns the berry black. This process also brings additional flavor and spice to the peppercorn giving them their bite.

I currently have some amazing Kampot Black Cambodian Peppercorns that I got from the Spice House in my spice cabinet.

are made when the skin of the peppercorn is removed, which leaves the inner white part. Have you ever noticed when you cracker black pepper you see white color. The black color is only skin deep.

I find that white peppercorns do not as complex flavor as black. So why use them? Well it’s good for dishes that are pale in color. If your making a light colored soup, it will be much more attractive to use white pepper. Plus there are dishes were I appreciate their flavor over black. That is for sure the case when I am making potato leek soup – it’s so good.

come from berries picked young while they are still green. They are then dehydrated. I would describe the flavor of green peppercorns to be more herbaceous. They taste more “green”.

Sometimes you will find green peppercorns that come in a brine that can include just salt and water or sometimes vinegar. They are sold near the caper at the grocery store.

Red peppercorns are the fully ripened berry with the skin remaining and no oxidation allowed to take place. Since they are being allowed to fully ripen they take longer to produce thus are most expense.

I have never seen them in the store before or anywhere until recently. As I was looking at all the spices available on the Spice House website I came across red peppercorns from Cambodia. I just had to try them. Lucky for me, the good people at Spice House were kind enough to send along some samples.

What is a red peppercorn like? Since the pepper is allowed to come reach it’s peak maturity like any berry the flavor is sweeter and more fruity tasting. I also find it to have more of a floral element. It doesn’t quite have the same bite you get from black peppercorns. I think it’s quite tasting and worth having along side your black peppercorns – maybe even dedicate a grinder to it.

As I mentioned the red peppercorns I tried were from Cambodia. That is pretty significant as Cambodia’s peppercorn industry was decimated during the reign of the Khmer Rouge in Cambodia. It took decades after their reign of terror ended to revive the pepper industry. People are returning and getting back to growing peppercorns and reviving the work of their ancestors. It’s truly a great story and I am so humbled to have the chance to try the fruits of their labor. 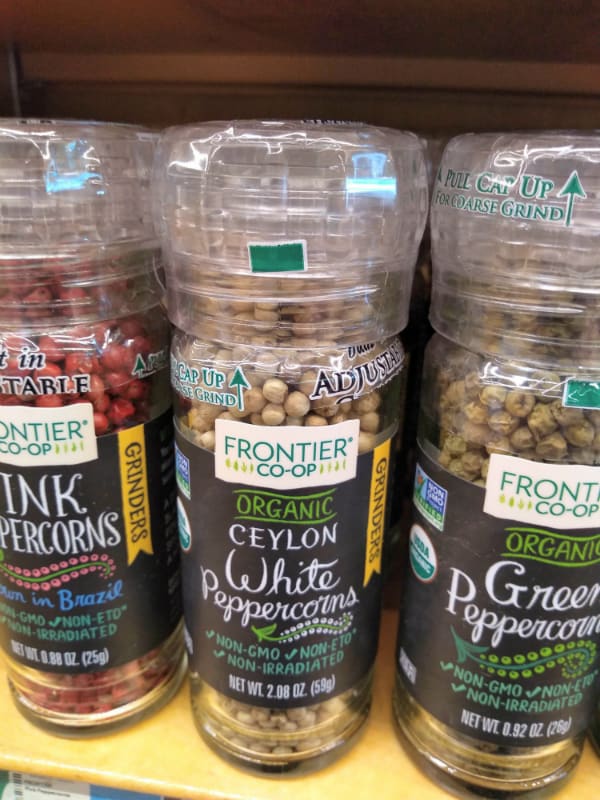 Ceylon is the name given to peppercorns from Sri Lanka. I often see it the most with white peppercorns but also cinnamon. Sri Lanka was known a Ceylon during British Colonial rule.

Other Names for Peppercorns

Besides the type of peppercorns just mentioned above, you may encounter some other names attached to your peppercorns, such as smoked or Tellicherry. Here some explanation of these terms:

Other “Types of Peppercorns”

You may find some spices with the name peppercorns in them. These other ones are not the same peppercorns as the ones above.  They aren’t Piper Nigrum, they come from different plants. Let me share with you a few I know of.

are the most common “non-peppercorn”. They grow on a South American plant called Schinus Terebinthifolius. They have a nice fruity, floral flavor. You will often find them include in peppercorn mixes than also contain black, white, and green peppercorns.

are also not true peppercorns. They are from the Zanthoxylum Simulans plant.

They are not as pungent as black peppercorns. Szechuan peppercorns have a lemony undertone and cause a numbing sensation on your tongue. They are used most often in Asian dishes that are meant to be spicy. Only the outer husk is used as the inner part does not have a pleasing texture (unless you enjoy eating sand).

Szechuan was banned in the United States from 1968 to 2005 because they were thought to carry a bacteria that could cause damage to citrus crops. It never had anything to do with health concerns. In 2005, the FDA allowed them to return as long as they heated to 160 degrees to ensure the citrus destroyer bacteria was killed.

Alton Brown used them during a couple episodes of Good Eats, which is where I first heard of them. The best way I can describe them is if black peppercorns and coriander seeds had a baby and named it Grains of Paradise.

Grind Your Own Peppercorns

Grinding whole peppercorns yourself is always the way to go. The oils in peppercorns are violate, which mean that will dissipate over time. Cracking them yourself will ensure you get the most flavor. 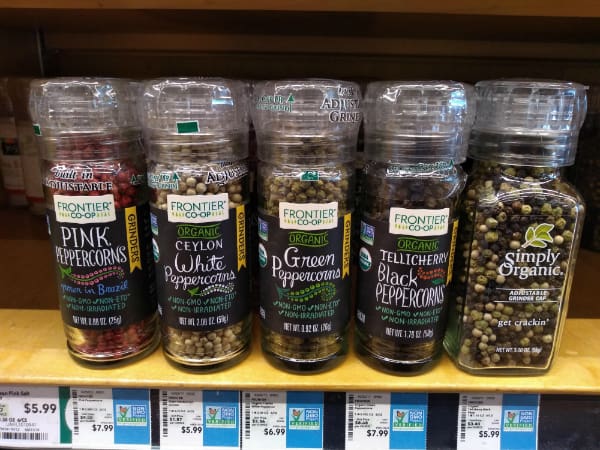 Pretty much every grocery store carries whole peppercorns that come in a grinder, usually plastic.

While I prefer buying them whole and putting them in your own grinder, you certainly can buy them inside a grinder. Sometimes the grinders work ok, and sometimes they can give you an inconsistent grind. That is why it’s better to invest in your own permanent grinder and then try to get your peppercorns in bulk.

Hopefully you learned something new today about the “King of Spices“- the peppercorn. Whether you choose black, white, green, or even the not-true peppercorn, the pink, make sure you always buy whole and grind them yourself. Let pepper reign at your table again.

Disclaimer: This posts includes affiliate links. This means that at no additional cost to you, I will earn a commission if you click through and make a purchase. These are products and services I recommend because I use or trust them. Cookies will be used to track the affiliate links you click. I was also given products for review. All of the opinions in the post are mine.