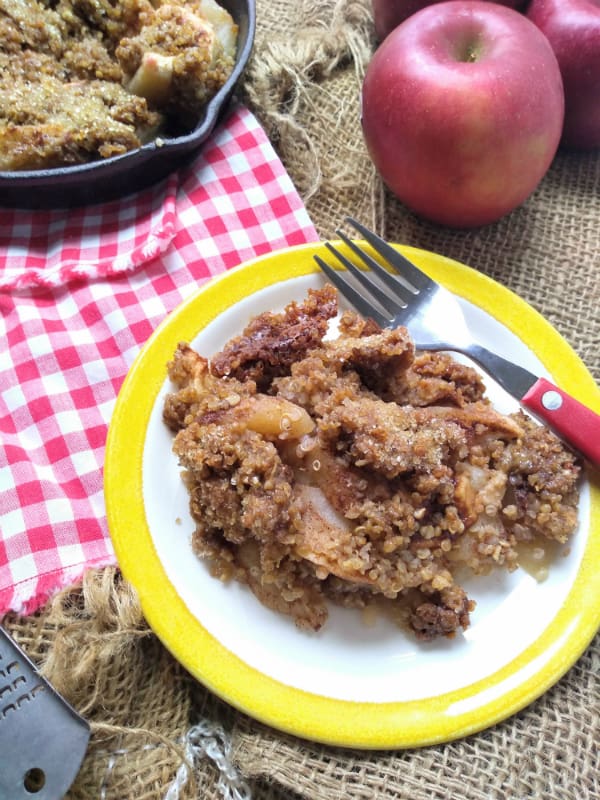 Fall desserts are the best.

Truly, they are. With so many apples and pumpkins available, dessert is just waiting to happen at a moment's notice.

The one dessert I make at a moment's notice quite often is apple cobbler. Sure pie is great and all, but sometimes you don't have the time to throw together a pie crust, wait for the pie to bake, and cool!

When you need apple satisfaction now, cobbler is king. I can grab a ramekin and an apple and throw together my own personal cobbler in just minutes.

For years I have been making the same recipe. It's a simple, good recipe that has worked for me time and time again. But you know I thought this was the year to take it to the next level. Enter quinoa. Yes, you heard me, quinoa.

You may not think of quinoa as a dessert ingredient but trust me, after you try this cobbler your tune will be changed.

Inspiration for the Recipe

My inspiration for this recipe comes from iHerb. I was browsing through their selection of quinoa products. They have a great selection of high quality quinoa from the best producers in the world. It got me thinking that I hadn't seen any dessert made with quinoa. Surely there could be. Oats are often found in dessert, especially in a cobbler. My philosophy is that if oats can do it, quinoa can do it too.

Two seconds of searching quinoa on Google would show you that it's some pretty healthy stuff. Adding it to a dessert gets some more nutrition into your body as well as still satisfying that sweet tooth that many of us have. 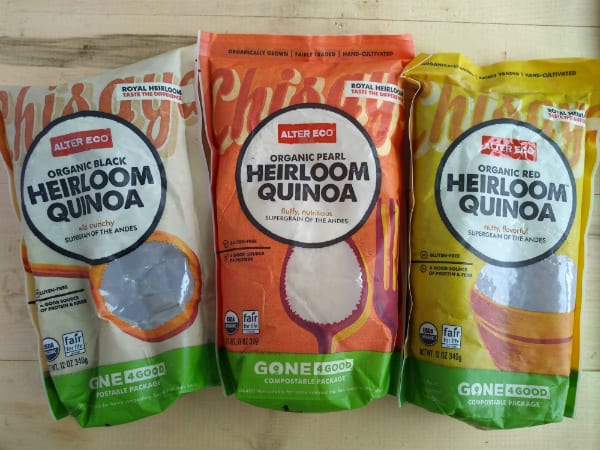 iHerb carries over 5,000 grocery products. Many of the products are ones you would find in health food stores or organic markets where you would pay more. If you live in a more rural location, you may not even have access to those types of stores.

iHerb ships their products to over 150 countries. Have a family member living overseas? iHerb would be a great way to send them some amazing food. If you need help and don't speak English, iHerb provides customer support in 10 languages.

Why I Love iHerb?

I personally loved using iHerb. The selection of grocery items available were all high quality brands that you can trust. Finding everything I needed was simple. Their website search worked seamlessly. Any item I searched for I found right away, which is a big time saver. Checkout was easy, not cumbersome.

iHerb also offers a loyalty credit. You receive 10% off the value of your next iHerb order within 60 days to use towards free products. How sweet is that?!

What are the Different Types of Quinoa?

For this Apple Quinoa Cobbler recipe I experimented with 3 different types of quinoa - whole uncooked quinoa, quinoa flakes, and quinoa flour. I also played around with different varieties of quinoa, but more on that in a moment.

The whole uncooked quinoa is what most of us are use to. They are tiny grains that will expand when cooked. You can easily recognize quinoa by the little circles you see in the finished product. Take a look at my finished apple quinoa cobbler, and notice the circles. 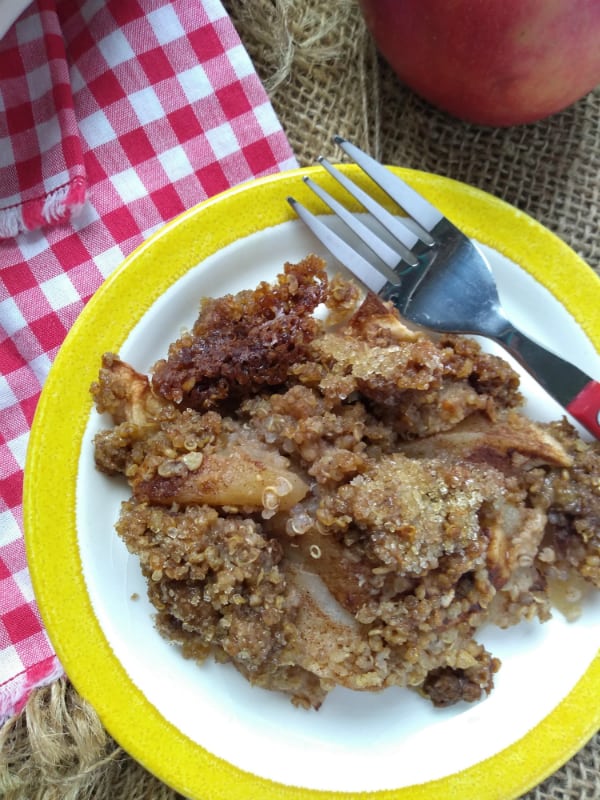 Do you see the little circles in the cobbler topping? Aren't they cute!?!?

Quinoa also comes in the form of flakes and flours. The flakes are rolled just like oats for oatmeal.

Since the grains of quinoa are a lot smaller than oatmeal, the flakes are pretty small too. People like to cook them as a hot cereal like oatmeal. Or you could do a mix between quinoa flakes and oats. We have made a cereal with them for my 7 month old daughter. She loves it!

The brand I tried out was Ancient Harvest Quinoa Flakes.

I was super pumped to see iHerb carries Bob's Red Mill, one of my absolute favorite companies. I have never tried one of their products that I didn't like. This was my first time trying Bob's Red Mill Quinoa flour. Quinoa flour is quinoa that has been milled just like you would wheat for wheat flour. It does not contain gluten, so those that are gluten free can use it. In my opinion it does have a strong flavor, so I recommend making something small with it first, so you can see if you like it. I prefer to mix it with other flours so that it's flavor isn't too overpowering. 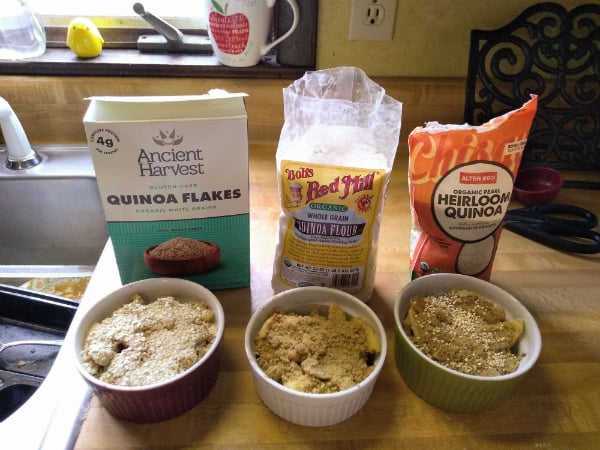 When I first set out to make apple quinoa cobbler, I started with some simple experimentation - then took it to the next level.

I tried the quinoa flour first. I took my standard apple cobbler topping and replaced the wheat flour with quinoa flour. It looked great and the texture wasn't much different than when I used wheat flour - that's a win. The quinoa flavor really came through. Probably a bit too much for most people's liking - my wife didn't care for it at all. You could try experimenting with mixing quinoa with wheat flour or oat flour.

Next I tried adding quinoa flakes to the dough, just as people add oat flakes to cobbler toppings. It worked wonderfully. It didn't bring a ton of flavor to the mix, but adding the nutrition from the quinoa definitely made me feel better about this dessert.

Another idea was sprinkling whole uncooked quinoa on top of the cobbler. I loved the nice crunch it added. I didn't know if the quinoa would be cooked well enough but that wasn't an issue at all in any of the tests I made. I figured if I just sprinkle quinoa on top and call it a day it would be kind of a cop out. 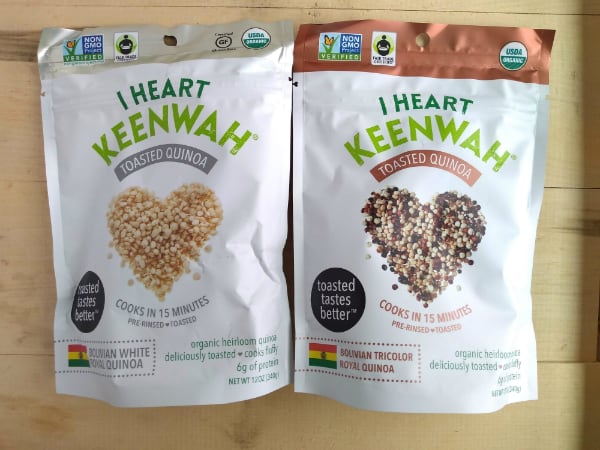 In my final recipe, I choose to use I Heart Keenwah Bolivian White. Every time I have, it truly blows me away. It has been toasted before hand, which adds so much nutty flavor. The I Heart Keenwah Tricolor Quinoa is great as well. This quinoa also doesn't have the bitter taste you get from some of the mass produced quinoa that has flooded the market.

Difference Between Varieties of Quinoa

In the end I chose to use cooked whole quinoa. I felt it gave the most genuine quinoa experience and really played up the quinoa as the star of the show, not just something to throw in there to call it quinoa. I opted for white quinoa for it's fluffier texture and milder flavor which would play the best in the dessert. The I Heart Keenwah White Quinoa was my favorite for it's toasty flavor, so it's the one I used.

Black quinoa is more crunchy and has a flavor more like wild rice. Red quinoa is not as crunchy as the black but not as fluffy as the white. It's flavor I would describe as nutty. I don't care for either one eaten o its own. I prefer them served with a protein like chicken that has been well seasoned. The white quinoa I will eat by the bowl full!

The Rest of the Ingredients

Quality ingredients from iHerb all around in this recipe. Here are a few other items I used that made this one amazing apple cobbler. 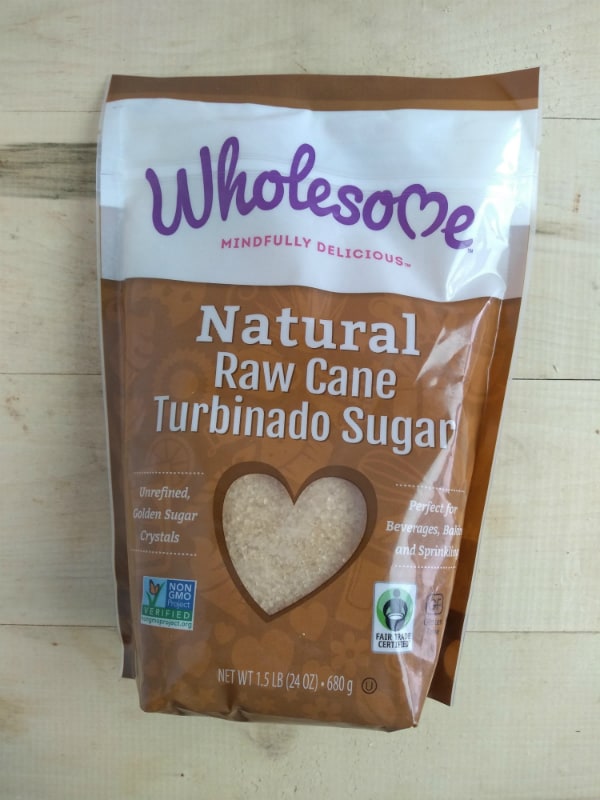 This unrefined sugar adds a crunch to the top of your baked goods.

Whether it's for a cobbler topping or a pie topping I love adding Turbinado sugar on top. The sugar doesn't melt in the oven so it adds a nice crunchy element to the top of your baked goods. For this recipe, I used Wholesome Sweetners Natural Raw Cane Turbinado Sugar. It is Non-GMO Projected Verified as well as Fair Trade Certified. 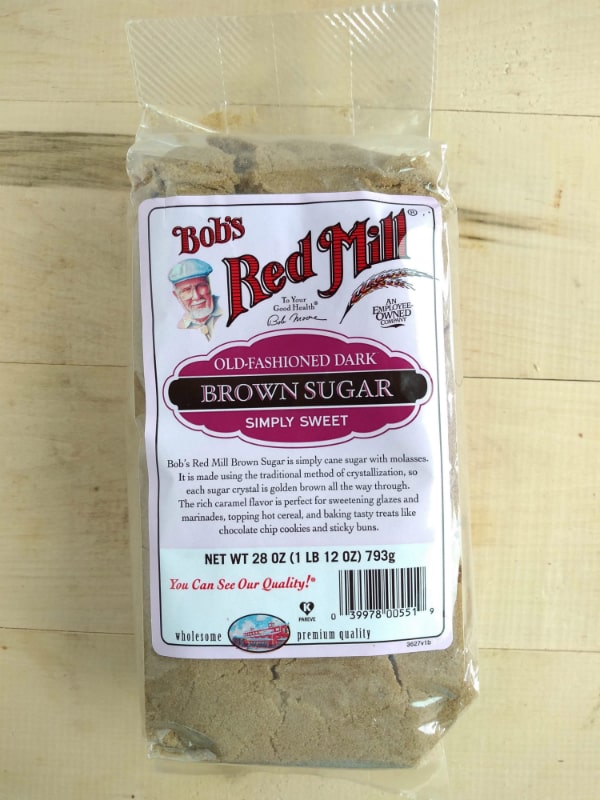 The Darker the Better!

Dark brown sugar is my jam. The stronger molasses flavor of darker brown sugars add more richness (that caramel flavor we all love) and that bitter flavor of the molasses rounds out the sweetness of the sugar. 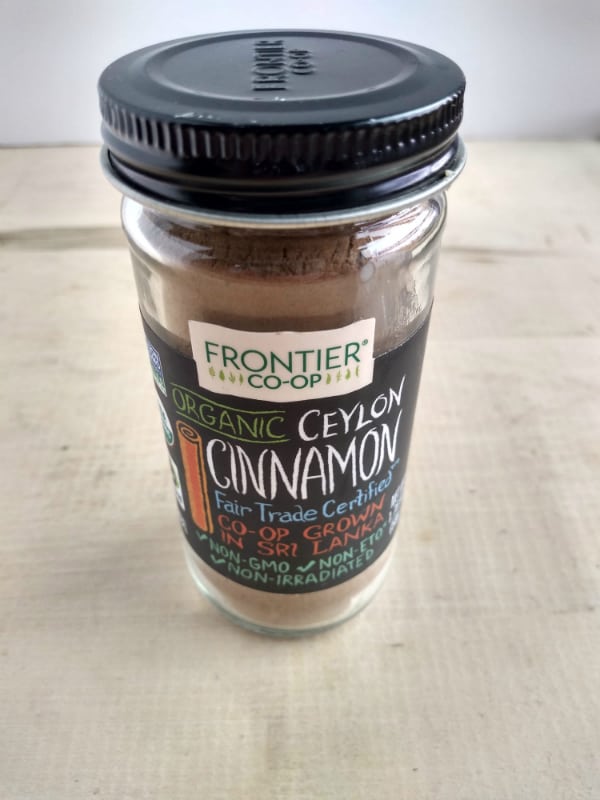 You can't have any apple baked dessert without cinnamon. If I was the Chief Justice of the Supreme Court I would make it the law of the land that cinnamon must accompany all baked apple desserts. There isn't much better than cinnamon and apples. Not just any old cinnamon will do. If all you have had is the cheap stuff from the grocery store then you don't know the flavor of a really good cinnamon. For this recipe I selected Frontier Co-Op Ceylon Cinnamon. Ceylon means its from Sri Lanka. Ceylon use to be the name of Sri Lanka when it was a colony. I have seen the name appear on White Peppercorns as well.

Ceylon cinnamon is true cinnamon. Most of what we called cinnamon in the U.S. is actually Cassia. The flavor of Ceylon cinnamon is more sweet and floral. It doesn't have that hot punch that Cassia does. You can definitely tell the difference when you spring for the good stuff. 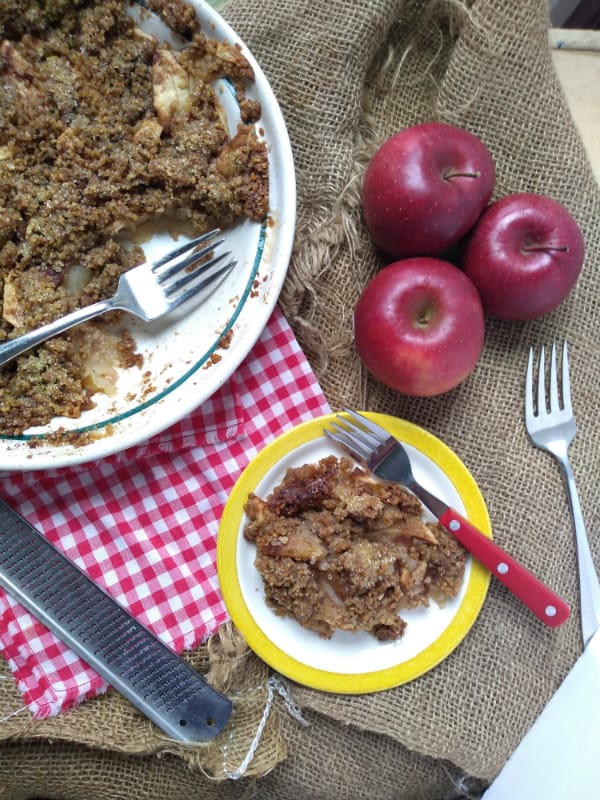 The apples you see pictured here are Red Rome apples. They are a great baking apple you can use for the cobbler and are also one of my daughter's favorite. Other good apples to try include Granny Smith, Jonathan, Honeycrisp, and Northern Spy.

I really wanted quinoa to be in the dessert. The last thing I tried was mixing in cooked quinoa into my dough. To make it a gluten free affair (as long as you use certified gluten free) I used oat flour instead of wheat flour. An equal mix of original topping recipe along with cooked quinoa and a splash of cinnamon made for a winning combination. The nutrition and flavor of the quinoa was there but not in a way that was overwhelming or taking anything away from the dessert.

Give iHerb a Try! 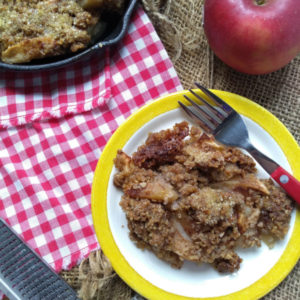 Give your favorite fall dessert a flavor and nutrition boost by using leftover cooked quinoa.
5 from 1 vote
Print Pin Rate

For the cobbler topping

? You can use Ancient Harvest Quinoa Flakes in your own apple cobbler recipe in place of oats. Or you could replace the cooked quinoa in my recipe with ½-3/4 cup of quinoa flakes.

? Make the cobbler topping using Bob's Red Mill Quinoa flour instead of oat or wheat flour. If you already have a recipe that calls for wheat flour, try it with quinoa flour.

? Instead of using cooked quinoa in the topping, you can just sprinkle any uncooked quinoa on top. The quinoa will be cooked through and add a nice crunch to the top of your cobbler.