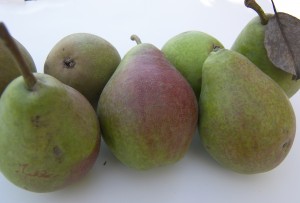 A few weeks ago, I saw some pictures of Clapps Favorite pears on a farm's facebook page. Their comments made me really want to try this pear, so I searched it out, and purchased some at the farmer's market in Port Huron. The pear is green with some red blush. The amount of blush differs in each pear. I had some with a lot, but most only had a little bit.

Clapp's Favroite ripens about 2 weeks before the popular Bartlet pears, which makes it one of the earlier pears. These pears must be picked before they have fully ripened on the tree or their core will rot along before the consumer has a chance to eat them. Since these pears do not keep well you probably won't find them in the supermarket, your local farm is the best option. But you must act quickly as the season is short for these pears.

Overall Feeling: This is a real juicy and flavorful pear. It has a nice texture to it, not too grainy. If you like Bartlet pears, you are going to love Clapp's Favorite. This pear is good for eating out of hand or in cooking applications. It's one pear I will be sure to pick up when they are in season.