What kind of honey does trader Joe’s carry? What are the difference between them? Is Trader Joe’s honey real?

Oh honey, how much I love you.

I love sampling different varieties of honey. Ever since my trip out to California, 7 years ago, when I first discovered orange blossom and avocado honey, I have been trying as many new varieties as I could.

You have to search them out. Most of the big chain stores don’t offer a good selection.

I have been keeping a close eye on the honey at Trader Joe’s over the last couple years. There has been changes to the original lineup when I first published this post.

I originally brought home 3 of their finest (100% Desert Mesquite, Turkish, and Mostly Mesquite) so that I could help make your decision of which to buy that much easier – ok, mainly because I wanted to taste them side by side, but I am using my blog as an excuse, which bloggers are allowed to do!

If you are interested in raw or organic honey, check out my post on Trader Joe’s Raw Organic Honey 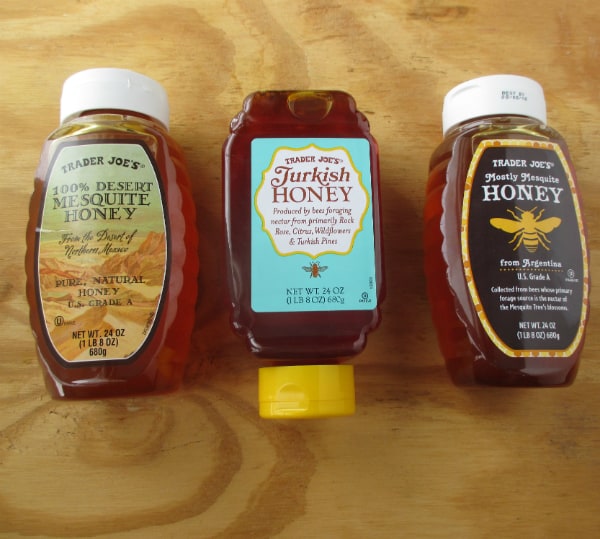 These are the 1st 3 honeys I bought from Trader Joe’s to do a taste test with. 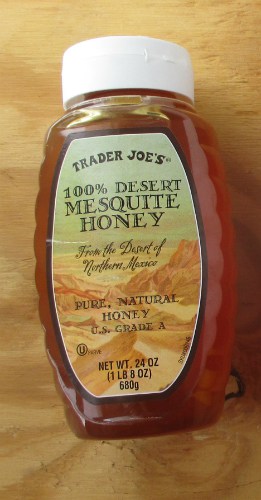 The original package for Trader Joe’s 100% Desert Mesquite Honey. I can no longer find it at Trader Joe’s. In fact now they have changed the wording on the bottle to say Mostly Mesquite.

Look in the photo below. The package has changed. 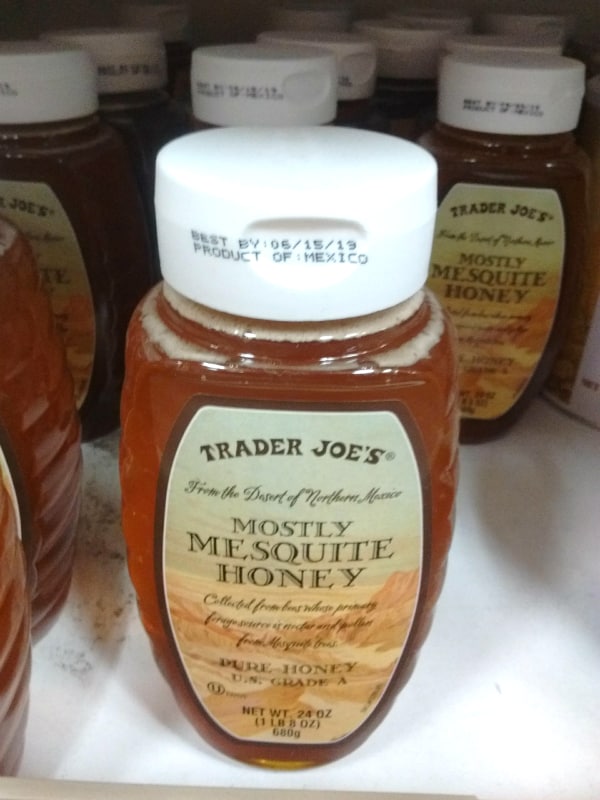 I guess Trader Joe’s Mesquite Honey is no longer 100% Mesquite.

Mesquite Honey
Origin: Desert of Northern Mexico
What is Mesquite? It’s a type of plant that actually falls into the legume family. It grows like a tree. You can find it in northern Mexico to the southwestern United States, even as far north as southern Kansas. It’s wood is used for smoking food, particularly in Texas and southwestern BBQ. When the tree blossoms it makes a great nectar source for bees. The honey that make from it is a light to medium amber color. It has a mild, yet distinctive taste. More flavor than just a clover honey. It would be great used in homemade BBQ sauce especially with some added mesquite liquid smoke – because it just seems appropriate.

Unlike the 100% Mesquite honey they use to sell, the bees also visit other floral sources. Makes me wonder if the 100% claim was never actually true or if something else changed where they couldn’t get 100% anymore.

I would say the Mostly Mesquite Honey is my favorite honey from Trader Joe’s. It most qualifies for Eating Like No One Else 🙂 I like that it has more flavor than a lot of the generic, somewhat boring honeys that are most common. 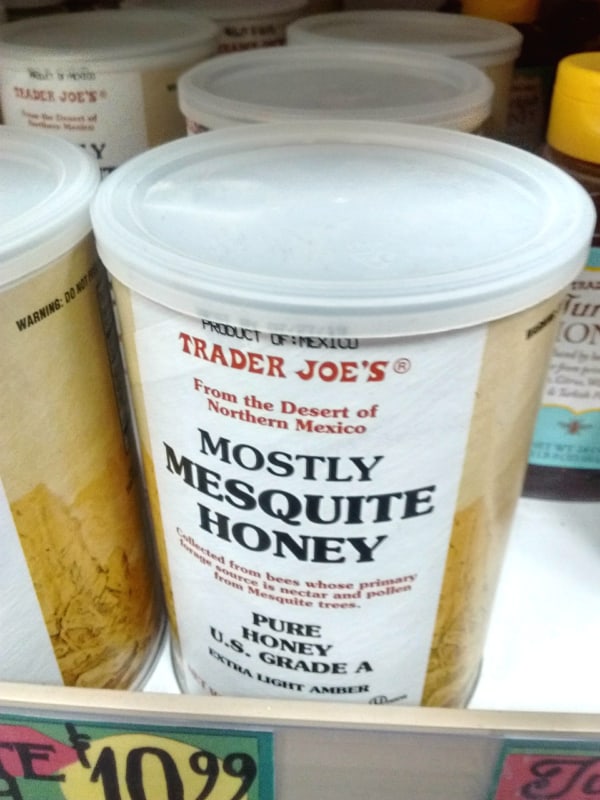 The larger container of Mostly Mesquite honey. This packaging too use to say 100% mesquite. It is a large amount of honey for $10.99.

The previous honey that was labeled Mostly Mesquite was from Argentina not Mexico. This honey had a slightly different taste than the Mostly Mesquite from Mexico Trader Joe’s sells now.

Turkish Honey
Origin: Turkey
The bottle says “Produced by bees foraging nectar from primarily Rock Rose, Citrus, Wildflowers, and Turkish Pines”.
This honey is vastly different than the Mostly Mesquite honey. It’s flavor is sweeter. It has a very unique hard candy like flavor that I have never had in a honey. It tastes just like I was sucking some kind of hard candy. It’s color is darker than the other two honeys as well. It has several floral sources. Rock Rose is a shrub found in temperate areas of Europe and the Mediterranean. When it blooms the shrub is just covered in flowers. Lots of nectar opportunities for the bees. The Turkish Pine is a pine that is native to Turkey and some of the surrounding areas. An aphid sucks sap out of the tree and then secretes sugar that the bees collect for honey. Yes I mean the bees are collecting aphid poop. Try not to think about that one too much. 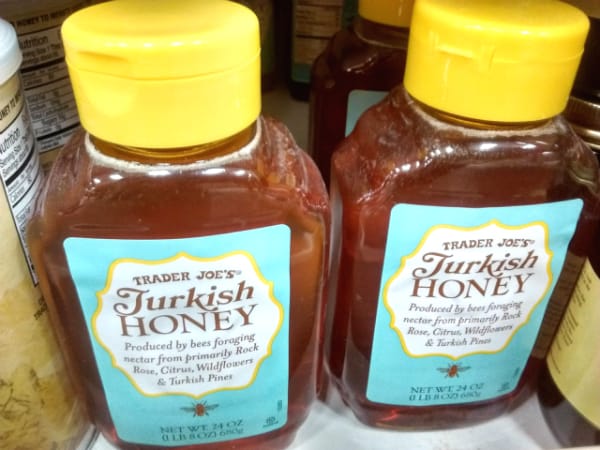 The most controversial honey at Trader Joe’s.

There is some question whether this honey is legit. Turkey is one of the high risk countries according to True Source Certified. What is the concern? That the honey has been doctored or add filler added to it so that it isn’t real honey.

This is a big problem with Chinese honey. To get around tariffs imposed against China, their “honey” is routed through different countries before being shipped to US soil. You can read more about this issue on my post on the Netflix series “Rotten”.

So it is legit? I honestly do not know. I am more wary of buying it now then I was before. I think the Mostly Mesquite tastes better which kind of makes it a mute point in my mind. 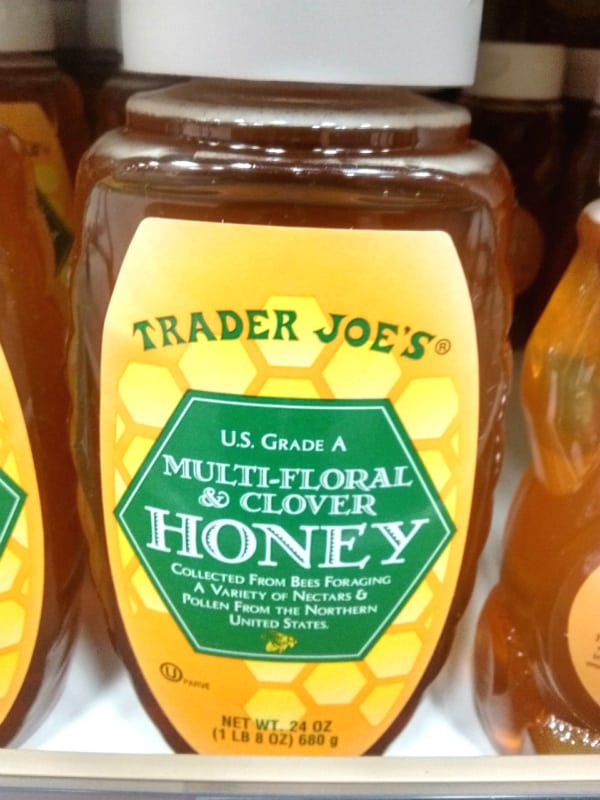 This honey will have the standard honey flavor that most people are use to. Nothing special about it. Clover is the most common honey is the United States. It is mild in flavor. This honey is fine for adding to your coffee or tea. I think a more flavorful honey is better to spread on your morning toast or yogurt. 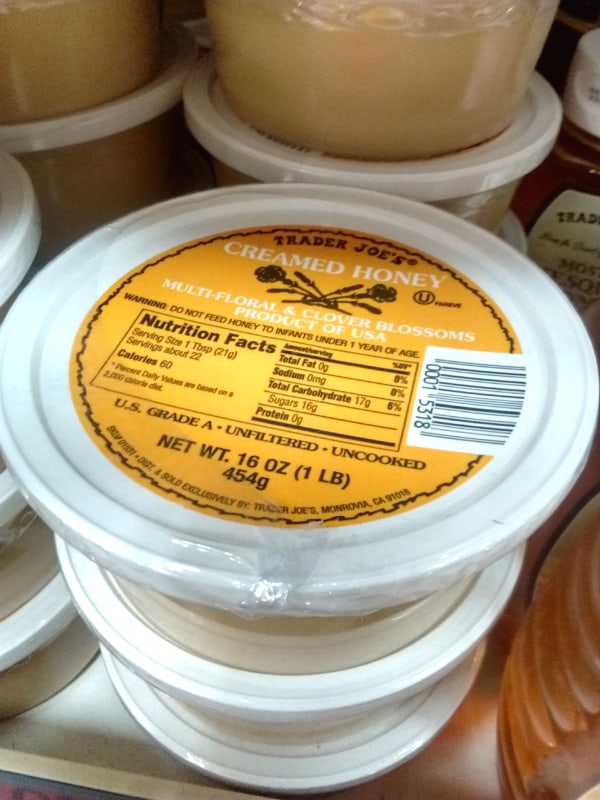 This is an unfiltered honey that will be more spreadable than the Multi-Floral & Clover Honey. Flavor will be pretty much the same, it’s more of a textural difference. 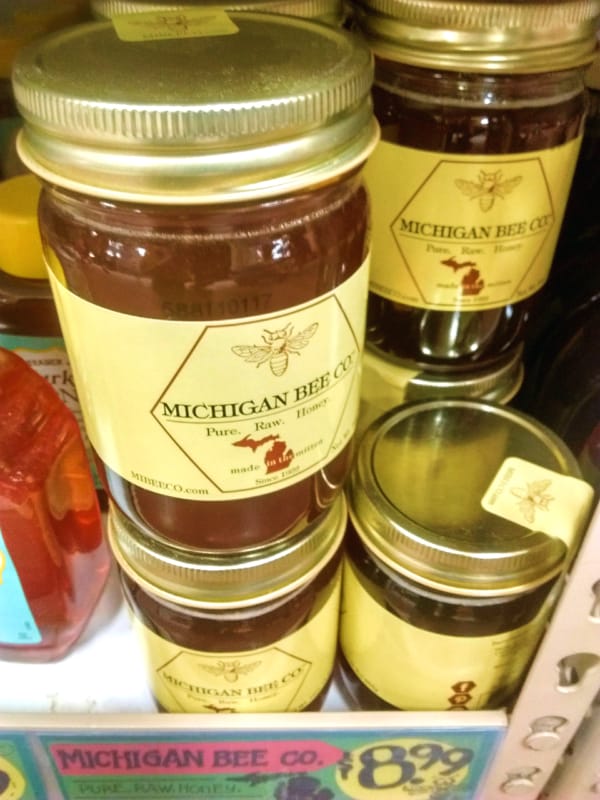 I have noticed Trader Joe’s carrying at least one local brand of honey in their stores. I saw a different local honey when I was in a Trader Joe’s in California.

There is a demand for local honey that Trader Joe’s is trying to meet. There Michigan Bee Co. honey is available in my local Trader Joe’s. When I was last in California I noticed a different local honey in their stores. The flavor profile will vary based on the region the honey is collected from. Typically these types of honeys are collected from multiple floral sources which gives the honey are more uniform, generic flavor. It’s good to see Trader Joe’s do something local in their stores. I often get on them for not doing enough local products. 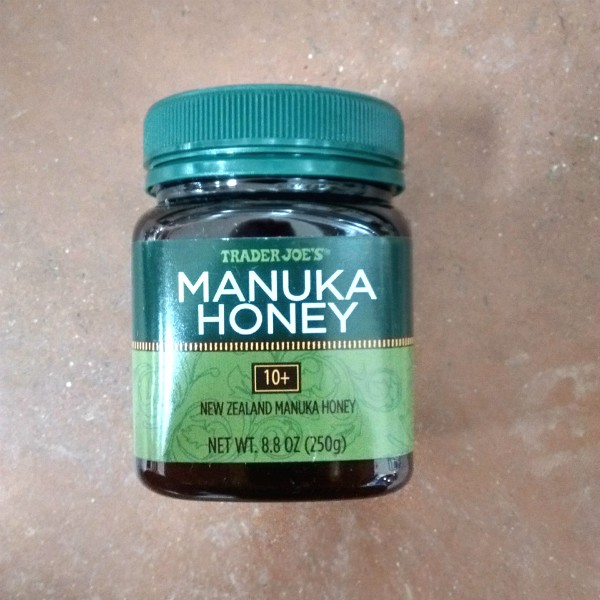 The Trader Joe’s Manuka Honey comes with a 10+ rating.

Manuka honey is all the craze right now due to it’s potential health benefits. It is definitely the most expensive honey in any store you go. Manuka honey is a stronger flavored honey. It has a slightly bitter taste than most darker honeys do (such as buckwheat). This is more of a honey that you take by the spoonful for health purposes (this is a whole another post) than a honey for everyday use.

You may notice a number on the jar. What does 10+ mean? There is a rating system for Manuka honey, that tells you the quality of the honey. This one is rated 10+ which falls into the medium grade category. 16+ is the best stuff.

As opposed to the Turkey Honey, the Manuka honey I feel completely confident in because it does undergo more monitoring and inspections. Due to the increased cost I only recommend buying it if you are doing so for the health benefits it is said to bring (again that is another post)

The last honey I want to mention is Bloom Avocado Honey. It is available in Trader Joe’s stores in California.

Avocado honey is a dark honey, the darkest I have seen at Trader Joe’s. It has a rich honey flavor with no hints of avocado, sorry. This honey does not crystallize, so yo won’t have that problem. Avocado honey is my go-to honey when it comes to using honey in savior dishes. The bold flavor it packs is perfect drizzled on top of cooked carrots. Yum!

Even if you don’t live in California but really want to try this Avocado honey, you can order it from Bloom Honey’s website. If you subscribe to their newsletter you can get 10% off your order.

If you enjoyed this post and wish to learn more about honey, give honey a HIVE FIVE! and sign up for our exclusive honey email list. Just enter your email address below.

What is your favorite honey from Trader Joe’s? Leave a comment below, we would love to hear from you!

Disclaimer: This post includes affiliate links. This means that at no additional cost to you, I will earn a commission if you click through and make a purchase. These are products and services I recommend because I use or trust them. Cookies will be used to track the affiliate links you click.