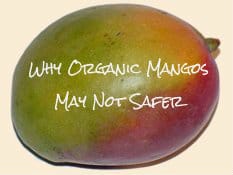 I am all about making wise choices when I am the grocery store. I don't always just go the cheap route. They are other factors to consider. Generally people want to save money but at times other factors come up. Like whether something they are buying is organic or not. Many of you are willing to part with more money to get organic produce. I certainly want to avoid pesticides in my food whenever I can. But it is always the best move to go organic? I previously spoke of a list of fruit and vegetables that were considered to be the safest to eat non-organic - the clean 15. One of the items that falls on the list is the world's most consumed fruit - the mango.

The first thing about a mango is that you do not eat the skin. So anything that is sprayed on a mango would have to make it to the actual fruit you eat. A report indicated that when mangos are tested for pesticides fever than 10% showed any residue from pesticides. Could be because of the thick skin or that growers aren't using much if any pesticides on mangos.

Hot Water Treated
Most mangos whether organic or not are hot water treated. They are put in water that around 110 degrees. This is done to kill any fruit flies or pests. I have to wonder if this also contributes to the lower pesticide residue found on mangos since they are already washed. Check out this YouTube on the process of hot water treating mangos :

Why Organic Mangos May Not Be Any Safter
The assumption that organic fruit is safer than conventional fruit is even further challenged with this recent story. Purity Organic announced a recall of organic mangoes when the FDA reported a positive test for listeria. These particular mangoes were received in Arizona, California, Colorado, New Jersey and Texas. No reports of anyone being harmed by these mangoes as of yet. Still it goes to show that organic produce can have those same problems. The problem lies with our food coming from these huge farms and companies that are more factory than farm. Some tainted water or surface that gets unnoticed in such a huge facility and you suddenly have a huge outbreak such as the listeria cantaloupe outbreak in Colorado a few years back. This is why I recommend that you buy as much as you can from smaller, local farms and orchards, where those kinds of outbreaks are less likely just because it's easier to monitor a smaller scale operation.