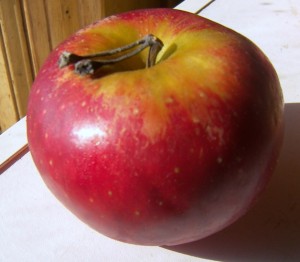 There are a lot of people who like to do their family tree. It's interesting to see what the people that came before you were like. If you wanted to do a family tree for an apple, the Elstar apple would be one of the most interesting. It is an offspring of the ever popular Golden Delicious and the Ingrid Marie, which may not be that popular but it is an offspring of one of England's favorite apples - Cox's Orange Pippin. The Elstar itself it's the parent of the rather new and tasty Junami apple.

The Elstar apple was developed in the Netherlands in the 1950s. It's a popular apple in most of Europe. It is a late season apple, ripening in sometime in October.

Overall Feeling: A well flavored apple, that isn't the most crisp apples I ever had, but was not mealy either. Tart finish in my mouth on some bites. Very aromatic! I have heard a lot of people liking this apple for applesauce and just straight out of hand eating.

« Why are Honeycrisp Apples So Expensive?
Westfield's Seek-No-Further Apples »