Up your cranberry sauce came by tossing out the water, and replacing it with some way more tasty.

A couple weeks ago I was looking at the keywords that brought people to my website, an activity we bloggers often engage in on a regularly basis.

One search was for ginger ale cranberry sauce.

I thought “hmmm…I don’t have a recipe for such a thing”.

I typically have made cranberry sauce with just water, really that doesn’t make sense. The water adds absolutely no flavor to the sauce, so why not use something instead that is going to enhance the final product.

Next time I was in the soda section of the grocery store, I picked up a 2 liter of Vernors Ginger Ale (an Michigan original) to give his concept a try.

I dusted off my homemade jellied cranberry sauce recipe and went to work on this new recipe. I simply replace the water with ginger ale, and cut out a tablespoon of sugar, since the ginger ale itself is sweetened.

The results – we have a winner!

The ginger ale added more depth of flavor to the sauce. The ginger flavor wasn’t super strong with the Vernors as I would have liked it to be, so the next time I upped the ante and used Reed’s Extra Ginger Brew, ad that made way more of an impression. Don’t be scared to reach for the strong stuff, it will pay off here. I also liked the carbonation of the soda pop adds another textural element, you could “taste” the bubbles!

Molds for the Sauce

You could just serve it out of a bowl or you could get fancy.

What I did was I actually used a cookie bowl pan as a mold. I simply poured the sauce in the pan when it was still hot. Then carefully remove them when it had fully cooled. Makes for a great presentation. You could use any sort of gelatin mold as well.

Or do like Alton Brown from Good Eats does, and use a clean empty can, so that it resembles the stuff right out of the can. It will be your secret for those that must have the can.

Adding flavor doesn’t necessarily have to stop that there, although this sauce is pretty good with the ingredients above.

If you really into ginger, try chopping up some crystallized or candied ginger. Chop it up really fine and add it to the liquid before you bring it to a boil.

You also could add some orange zest – that is a classic flavor combination. Or you could replace some or all of the sugar with honey. A rich, dark honey like a buckwheat honey would really do wonders.

To sum it up, the sky is the limit. Play around with it. Make this recipe your own. 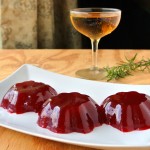 Disclaimer: This post includes affiliate links. This means that at no additional cost to you, I will earn a commission if you click through and make a purchase. These are products and services I recommend because I use or trust them. Cookies will be used to track the affiliate links you click.