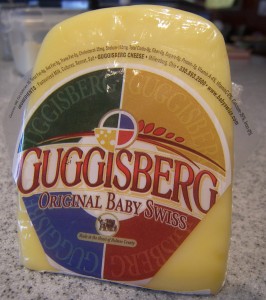 Whenever a great cheese variety has come along everyone jumps on the bandwagon. One person invented Colby cheese and eventually everyone had their own Colby cheese. Same thing with cheddar, jack, and so on. A lot of those cheese are just cheap rip-offs. I did a test earlier this week. I had a bar of Kroger brand Colby cheese and Kroger brand mild cheddar. I did a blind taste test, and could not tell any significant difference between the two types, when in fact there is distinctive difference between a true Colby and a true mild cheddar. 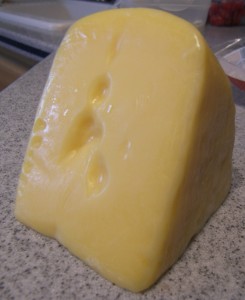 So if we can go the origin of that cheese and buy it from them, we get the cheese in it's original glory. I recently found baby swiss made by the people that invented it: Guggisberg. They invented baby swiss in the 1960s. The goal was to make a swiss cheese that would be more situable for the American marketplace. This lead them to develop a cheese that was milder and creamier. It was named Baby Swiss because a wheel of it dwarfed a wheel of the traditional Swiss cheese.

I have had other Baby Swiss before but nothing can match up to Guggisberg. Traditional swiss is too strong for my taste. This Baby Swiss has a muted swiss flavor and it very creamy. It doesn't have any weird aftertaste like I gotten from previous Baby Swiss I have tried. Also those other Baby Swiss cheeses were in a block form, where as the Guggisberg comes as a slice cut from a wheel. If you like Baby Swiss and have never had the original stuff, then you must seek it out. It is amazing!

Where to Buy
I purchased mine slice of wheel at Meijer in Ann Arbor, Michigan. You can order cheese directly from the company's website.