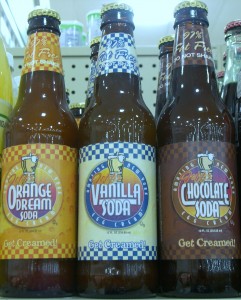 I was shopping at Hiller's in Ann Arbor, Michigan a while back, when some bottles of soda pop caught my eye. The thing that first got my attention was the fact that the bottles said 97% fat free. But wait isn't all soft drinks 100% fat free? I had to go in for a closer inspection. That is when I discovered this wasn't just an ordinary soda pop, this was an egg cream. An egg cream is a drink that became popular in the late 19th century. It was the combination of a syrup, usually chocolate, milk, and soda water. Those ingredients were mixed together and served immediately. Despite the name, egg creams don't contain either eggs or cream.

So what I discovered was a bottled version of this drink popular at the turn of the century. I purchased three different flavors - Orange Dream, Vanilla, and Chocolate.

My favorite of the three. It was lighty carbonated, tasting much like a blended orange dreamsicle. Ever aspect of this drink I liked. I would seek this flavor out again.

The vanilla flavor was pleasant. However I just felt this one was too sweet. My wife couldn't even drink it. If the sweetness could be tamed this soda has some potential. For now I am ended up disappointed with this one, after I had such high hopes drinking the orange dream first.

Where to Buy
The only place I have seen it was at Hiller's in Ann Arbor. For more information, check out the product website. If you have seen these drinks in stores before, please leave a comment below, telling us where at.

« The Pecan Harvest and the Weather
When Does Orange (and Mandarin) Season Begin (and End)? »