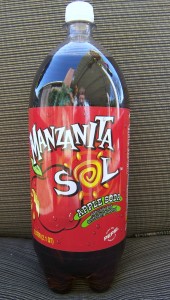 When was the last time you had an apple soda pop? Have you ever had an one? If you have been to Mexico or live there, then you are most likely answering yes. Apple is the 2nd most popular flavor of carbonated beverage in Mexico. But it's not that way north of the border. The only apple soda pop I have reviewed for this site are green apple flavors by Jones and Jelly Belly. Neither of them did I think were all that great. Now I have discovered another apple one at a grocery store in Southern California called Manzanita Sol (which means "Little Apple Sun"). It is distributed by Pepsi. But you can only find it in markets that have a high Hispanic population. Here I have seen it at several stores: Stater Bros, Albertson's, and Target to name a few.

I heard some people saying the drink contain caffeine. But that ingredient does not appear on the 2 little bottle that I purchased.

I was very pleasantly surprised by this drink. I am not really fond of anything Pepsi has their name on, but this drink is an exception. It doesn't have a candy apple flavor like I was expecting. It has a subtle apple flavor that isn't too sweet at all. The carbonation was too bad, considering it was bottled in plastic. I would love to find a glass bottled version of Manzanita Sol.

Where to Buy
Whereever there is a high Hispanic population you should be able to find it in most grocery stores in that area. I heard it's really popular in El Paso, Texas and other boarder towns. You could check the Hispanic/Mexican section of your local grocery store to see if they carry it there.