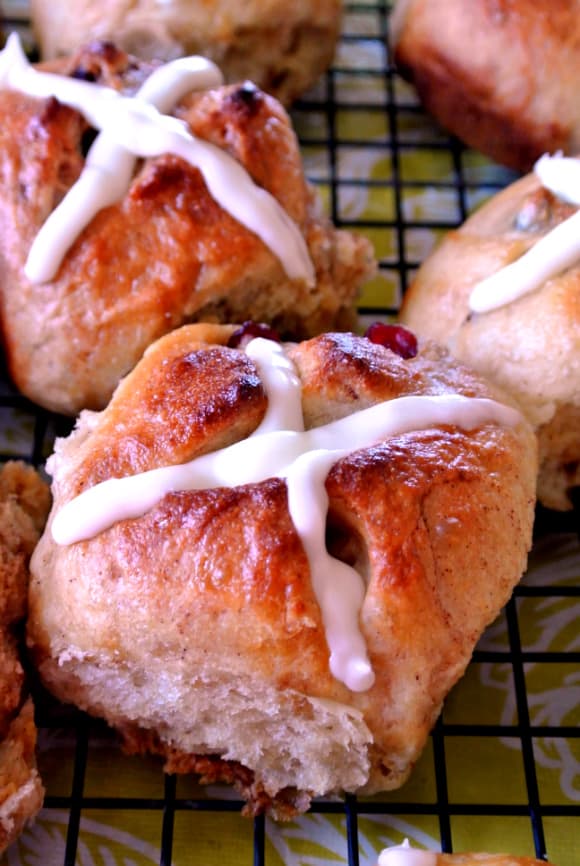 This year I am starting a new tradition in our house - making hot cross buns for Good Friday. I wrote early about why we eat them on Good Friday (check out that post) and now I am going to share with you the recipe I used. I choose Food Network story and blog queen - the Pioneer Woman - Ree Drummond's recipe for hot cross buns. Her blog laid out really well the whole process. Althought I did vary from the recipe/procedure a bit which I will get into below. To print out the recipe, visit the Pioneer Woman's website.

How to Make Hot Cross Buns

1. When making hot cross buns or other sweet breads like Challah, a sponge method is used. This is where you create a dough and save some of the ingredients including additional flour for after the 1st rise. The sugar is dissolved in milk and oil, then the most of the flour is added.

2. After a 1 hour rise, I added in the rest of the dough ingredients. The dough itself did rise but not necessarily doubling in volume like you see with most standard bun or roll recipes.

3. For the cinnamon sugar, I also added some freshly grated nutmeg and allspice. About ¼ teaspoon of each.

4. Instead of going raisins I instead added a Dried Cherry Berry Blend (Montmorency Cherries, Cranberries & Blueberries)

. I think those fruits just taste better than raisins plus I liked the idea of going with multiple types of fruit to get the buns more depth of flavor.

6. Another thing I did differently than Ree is that I placed my rolls into 9 inch round cake pans

. I don't like the sheet pan idea as this allows room for the rolls to spread out. I want them to rise up more than spread out, so if they are in a tight space they will be forced up. This is the same thing I do whenever I bake any kind of dinner roll.

7. For the icing Ree mixes in an egg white. I decided to forgo this step as I didn't want my icing to be too hard, I like it on the softer side.

Wow, these were amazing. The buns were soft and moist. The spices were a delight for the tongue. The best part was my decision to add the dried cherries, cranberries, and blueberries. Both the cherries and cranberries provided a bit of tartness that was such a nice treat in the sweet dough and the icing.