If you are an avid reader of this blog you will know about my love of cobbler - case in point my tart cherry cobbler  recipe and how I compromised on a peach pie. Those are all fine and dandy, I wanted to give something else a try. Last week I found an excellent deal on some pluots for only 69 cents a pound. So of course I bought as much as a bag could hold. I also had on hand some rhubarb that my mom gave me the last time she was at my house. Thus inspiration was born - pluot rhubarb cobbler.

In case you haven't tried them yet, pluots are great for baking. Pluots give this cobbler an amazing texture. They have a lot of pectin in them which makes them jelly. If you have struggled to produce cobblers that weren't a runny mess, then you need to give the pluot a try. It's your safety net against runny cobblers.

The tartness of the rhubarb and the sweetness and the added zing of the skin of the pluot makes for a delightful flavor combination. I might challenge that it's as good as or even better than strawberries and rhubarb.

To learn more about different types of baked fruit desserts, read my post on What is the Difference Between a Cobbler and a Crisp? 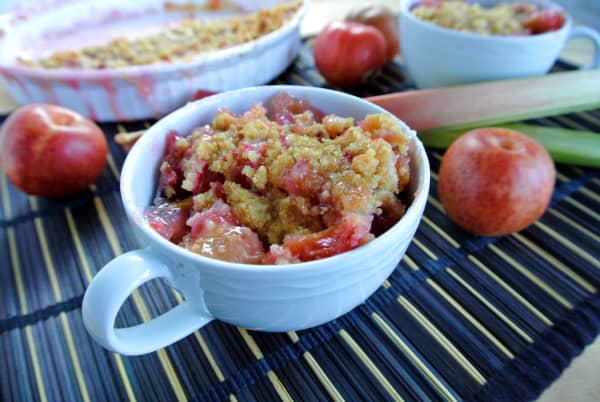 I made a double batch of what I would normally do, such as with previously mentioned cherry cobbler. So either make it large or cut it in half. The double batch serves about 8-10 people as it is rich, so you don't need to eat a whole lot to be satisfied, good for your waist line! 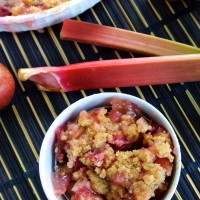