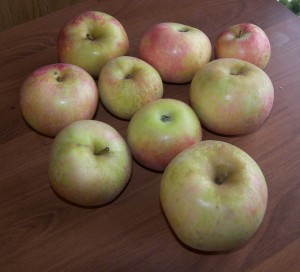 One of the most wonderful things about a farmer's market is finding varieties of produce that you would never find in the super market. At the Ann Arbor Farmer's Market, I discovered the Red Astrachan variety of apples. This mostly green apple with red streaks, originated in Russia. There were introduced to England in 1816 and then came to the United States in 1835. This is considered an heirloom variety. They are an early apple being harvested in late July to early August.

One of the reasons why this apple will not be found in a store is that it has a short self life and supermarkets won't the exact opposite. The ones I bought are already getting soft. But I was told that these apples improve with flavor over time (that is until they rot). The trees that produce this apple are productive every other year (which also doesn't appeal to the supermarket).

Overall Feeling: The first apple I tried from the bunch was overwhelming tart. It wasn't so tart that I could not eat it, but probably one of the most tart apples that can still be eaten out of hand. But after 5 days the apple got a bit softer and the tartness wasn't as overwhelming. The apple flavor and sweetness seemed to improve. The drawback is that the apples are borderline becoming too soft, so I will have to finish these up quickly. Again this is way the apple is not found in stores. My 2 year old daughter enjoyed this apple. She enjoys tart fruit. She will eat really tart blackberries straight up with no sugar.