Owner Nancy of Nanny Goats Cafe and Feed Bin has had tons of experience at starting and then selling restaurants. It’s her passion. But this time around she is having trouble making this cafe in Kilgore, Texas a profitable one. Robert’s goal is to get to the bottom of the reasons why she isn’t succeeding this time around in one of the most drama-filled episodes of Restaurant Impossible.

A tempura battered shrimp served with a wasabi/mayo sauce. The tempura batters uses carbonated water to make for a light, crispy batter. 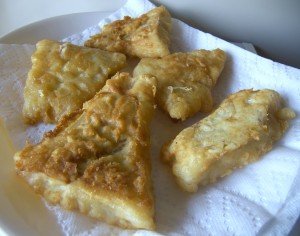 I have been a big fan of fried seafood for years. During my childhood I countless times ordered fish and chips at a restaurant. The crispy outside and the flaky inside is such a wonderful textural experience for the mouth. I wanted to create that experience in my own kitchen. However it isn’t easy to make the fish crisp without being too oily. It took me a couple years to come up with my best cod recipe – with the help of a couple different Food Network personalities. I took a recipe I have been using replaced the water with carbonated water and the flour with cake flour. Cake flour contains less protein and is finer. These two changes helped to make me fish more crisp and delicious. Click here for that recipe.

The restaurant is survived but it’s owner did not. Before the episode could even hit the airwaves there were new owners in place – a Restaurant Impossible first. After the episode I am not surprised in the least. The owner is all about starting and then selling when she can make a profit. As soon as business picked up and the fact that the restaurant would be on the show thus appearing on Food Network many times over in re-runs that it was time to sell the place. There is nothing wrong with that. If that is what she likes to do then go right ahead. Now it’s hard to predict how this place is going to do run by different owners. I would love to hear from anyone that has been there since the new owners took over.