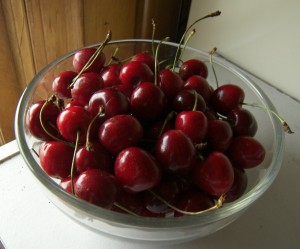 This past weekend, I picked up a new variety of cherry (at least knew for me), Sam. It was hard to find out much about them online without stumbling upon a Sam's Club link (if you are here looking for info on cherries at Sam's Club, then just take a few moments to check out the site). Sam cherries are a mid-season cherry, but I am already buying them out at my local farmer's market. They were on the small side, so I wonder if these cherries could have gotten a bit bigger if they were picked later. Their average harvest date is July 6th and I bought them on June 25th in Ann Arbor, Michigan.

The unique thing about these cherries is they cluster on the tree like grapes. Many of the cherries I got were connected via their stem. The flavor was good, but I found them to be a little more tart than I would like for an out of hand eating cherry. Again is this because they were picked too early? I decided to use them in a cherry topping for a cheesecake I was making for my wife's birthday. The Sam cherries made a delicious topping!

Sam cherry trees are known for being late bloomers even though they ripen before Bing cherries. They are also not all that productive compared to other varieties. You probably won't them this variety in the store, just directly from the farmer. As it comes to the origin, the only thing I could find was that they originated somewhere in Canada. This variety is grown in Michigan, Washington, New York, and possibility some other states.