Home » At the Store » Fruit & Vegetables » Seville - The Sour Orange

When it comes to sour citrus, usually people think of lemons or limes. But not oranges. Oranges are sweet. It is probably the most common adjective advertisers use when they are selling oranges. But there oranges out there that aren't sweet at all. Case in point, the Seville orange. This orange is very sour and bitter. It has huge amount of white pith on the inside. You want to bite into these oranges just as much as you would want to bite into a lemon.

The Seville Orange is widely known throughout the Mediterranean region. The orange orginated in Asia and was then brought into the region. It was the only orange that Europe knew for centuries. They did not have all the sweet oranges we have today. The orange got it's name from Seville, Italy where it was widely grown. Seville or sour oranges were the first oranges to reach the "New World". 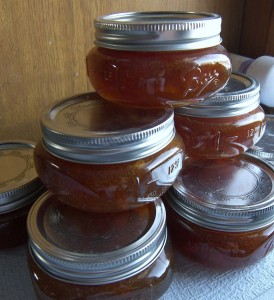 What Do I Use a Seville Orange For?
So why would any want a sour orange? The same reason people use lemons and limes. The orange itself has good flavor once you get past the bitterness and the sour taste of the juice. I squeezed a little bite of the juice on some chicken was I was roasting, just as I would with a lemon. Probably the most often use for this orange is in marmalade. I heard Alton Brown once say this is the best orange for that job, so if you can find them, buy them. There are a couple reasons why this orange makes a great marmalade. As with any jam type produce, you use a lot of sugar. By using a sour fruit, you can add balance to what you are making. One of the coolest characteristic of the Seville orange is that it's higher in natural pectins than any other orange. Pectin is what makes jams, jellys, and marmalade thick. You can make your own orange marmalade without having to add any pectin. Also the rind is usually for making candy or oils.

Availability
In the US, Seville Oranges can be hard to come by. I have only found them at specialty produce stores or Whole Foods. And when I did find them, they didn't last in the stores long. These oranges have a short season, so get them what they are available. Don't wait until your next grocery trip, because they could be easily gone. The season is about March to April in most of the country.

« Recipes Using Honey
Review of Good Eats: The Proof is in the Bread Pudding »