Bacon is one of America's favorite breakfast foods. It's amazing that we have been able to take what seemed like a useless piece of the pig and turn it into something delicious. When purchasing bacon there are some things that you need to consider, some of which can have a impact on your health. I learned a lot about bacon from watching Alton Brown. On an episode of Good Eats entitled "Another Man Food Show - Breakfast". Alton gives some great tips on shopping for bacon. Here is what he recommends (with my comments below each recommendation)

1. Buy bacon from the meat/deli counter
The best bacon in your supermarket is not going to be where you typically buy it, next to the sausage in a refrigerator section. The best bacon will be at the meat or deli counter. Some places have whole slabs of bacon that are uncut. This gives you the advantage of having the bacon cut to your preference. How is that for freedom of choice! Even the bacon at these counters that is cut is better than the packaged stuff. Packaged bacon needs to have a longer shelf life, so you are more likely to see more preservatives. I also like being able to buy as much bacon as I want. Sometimes I just need a couple rashers for a recipe (like Brussel Sprouts with Bacon).

2. Never Buy the Cheap Stuff
Alton says you get what you pay for, and that is so true with bacon. Creating a truly great bacon takes time. And in the food industry time is money. So some factories making cheap bacon will inject chemicals like sodium nitrate into their bacon. You can buy bacon that is uncured, or not treated with nitrates (Niman Ranch makes a bacon like this). These chemicals are certainly not good for you and there are concerns about them contributing to causing cancer. The factories also add liquid smoke to their bacon instead of actually smoking the bacon.

3. Look for Center Cut Bacon
When you do purchase bacon from the refrigerated section of the store, look for bacon that is labeled center cut. This bacon comes from the leaner and more meaty section of the pork belly. More meat and less fat is a good thing. Most major bacon producers will have a center cut version. Oscar Meyer does (which is actually the brand Alton shows during the show, but the name is blocked out on the package).

My Own Tip
Earlier I mentioned some bacon by Niman Ranch. This is very good bacon that is treated only using nature nitrates from celery. It's more expensive bacon. The only time I have used it, was for dinner, not breakfast. I made some homemade waffles to go along with the bacon. Making your own waffles is super cheap, so you can afford to go with some top quality bacon and still make your dinner budget.

With these tips you can make your bacon buying decisions be more informed decisions. Don't just look for what's on sale and buy that. Really check out the packaging. And if you can find it, buy bacon from the meat counter.

For tips on buying "healthier" bacon, check out my post "Healthiest Bacon to Buy and Eat" 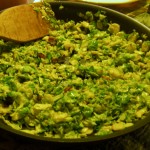