Learn how to make Alton Brown's Potato Leek soup, a tasty soup that I made even better with the addition of bacon! Alton, why didn't you include bacon to begin with? 🙂

In 2018, Alton Brown unleashed on the world a new series "Good Eats Reloaded". Alton made 13 episodes going back over this previous shows and make renovations to them. New recipes were added, information was changed, and puppets were harmed in the process - yes puppets, sorry puppet lovers.

In the spirit of the Reloaded mindset I am going back over old posts on this blog and give them their own reload. What better way to do that then update this Potato Leek Soup Recipe Review I originally posted back in 2010.

The parts of the original post are in quotes.

There are many things that I passed in the grocery aisles for years, before I started to learn to cook.

Many green item I did not consider in the produce section such as cabbage, kale, collard greens, and the leek. The leek came off this list, when I saw Alton Brown in the episode "Sprung a Leek" use them in making a potato soup. Below is my notes from making this soup.

Back in 2010, I was still just learning to cook and use more ingredients. Things as simple as cabbage were foreign to me. Hard to believe now.

1. The first time I made this soup I did not have any Yukon Gold potatoes on hand, so I had to use Russet. It still produced a good tasting soup, but the Yukon Gold add a buttery taste to the soup, so I would buy them.

I have never used a Russet potato to make this soup since, only that time. Gold potatoes work so much better in this soup. Save your Russet for baked potatoes.

2. Buy whole white peppercorns for this soup and grind them in a spice (coffee) grinder. I also like to add a couple pinches of white pepper to my bowl when serving. The white pepper really makes this soup. It brings a great depth of flavor to the party.

Man, do I love white pepper in this soup.

3. The recipe calls for vegetable broth. I used Better than Bouillon Vegetable base, which you mix with the appropriate amount of water (it says on the side of the container).

Um NOPE. I have not bought vegetable broth or any kind of base in years. Vegetable broth is so easy to make at home, in a very short time. Just save veggies scraps.

I have actually made it before using chicken broth (it's really good with Kettle & Fire Chicken Bone Broth). My wife isn't a huge fan of vegetable broth.

My family is too big now for half recipes of anything!

5. My daughter loves this soup and she is two years old!!! Little does she know that she ate leeks.

6. For the dairy, I don't always have cream or buttermilk on hand. So I have used different combination of milk or half and half. Cream is best and will create a thicker soup. But if you want to cut out the fat or save some dough, then you can just use milk, the soup will still be good, just not as thick. I have never actually used buttermilk in it before, but I will try it next time.

I have now tried it with buttermilk. It's a must. The soup has a deeper flavor when you use buttermilk. The tang is a welcome addition.

My family loves this soup. It is easy to make and I can find all the ingredients without trouble. The leeks add a nice touch to the soup without being overpowering. I prefer leeks over onions, plus with leeks, no tears! The addition of the white pepper is what really does it for me. I never expected I would really like this soup, but I do. It makes a great lunch, appetizer for dinner, or even a main course along with some kind of greens.A

This soup got me into two different ingredients - leeks and white pepper, that I use now in several other recipes. Those are the kinds of recipes I love, ones that introduce you to ingredients you didn't use before.

I believe I have improved the soup now by adding bacon to it. Alton, why wasn't there bacon in it before? The smokiness of the bacon is such a nice touch. If you omit the bacon, then maybe a good smoked sea salt would be a nice finishing touch.

Have you ever wondered what the difference is between potato leek soup and vichyssoise is? Me too. I dug around a little on Google. What it seems to me is they are pretty much the same soup, although often when it's called Vichyssoise is it being served cold instead of hot. I am saying that is the main difference. 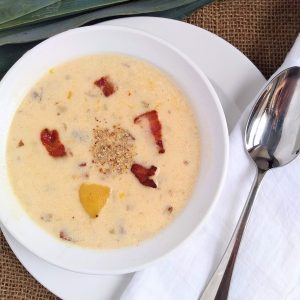 This recipe is for Alton Brown's Potato Leek Soup. In my version I have added bacon to it. You're welcome. Off course if you want to leave the bacon out and use vegetable stock you can make the soup vegetarian. The instructions have been written in my own words.
No ratings yet
Print Pin Rate