Before I start this post, can you hold on for one second?

(proceeds to run around the house screaming and yelling)

Guys I am pumped. Good Eats is BACK! Well it's more reloaded than it is back. Alton Brown has updated some of his past shows, before he embarks on new culinary trails.

In the early days of this blog, I would review the new recipes he would release on Good Eats. I am excited to have the change to bring back those types of posts for the Reloaded series.

Why I like to review recipes as oppose to just writing my own is that I like to share recipes that not only brought me good food but also taught me something that I use it other recipes down the road. The recipe I am talking about today is no different.

Pantry Raid I - Use Your Noodle - The Reload

The 2nd episode of Good Eats Reloaded that aired was Pantry Raid I - Use Your Noodle - The Reload. In the original episode I was introduced to bronze dies and have been buying pasts made with them every since.

In the Reloaded version, Alton has changed his tune about pasta. He always said pasta needed to be cooked in a gallon of water. But he has to come to learn and except that you can cook it in in far less.

And sometimes that has huge advantages.

One example - Cacio e Pepe - a dish that contains just cheese, oil, and pepper. The key to it's deliciousness is cooking the pasta in very little water and then using that very starchy water to create a creamy sauce that doesn't contain any actual cream.

Here are my observations from making this dish.

This dish is truly all about the pepper. You want to use the best you can find. For that I turn to Burlap & Barrel - a single origin spice company that sources spices from small farms all over the world.

Last time I made Cacio e Pepe, I used a 50/50 combo of their purple peppercorns and white fermented pepper. The purple added a fruity, spicy kick, while the fermented white add a umami flavor.. They make for a great team!

I have also used red peppecorns. Not pink peppercorns that you find everywhere. Red peppercorns are hard to find. They are the fully ripened fruit that has been allowed to dry. Their flavor is more pronounced, sweeter, with a bright floral taste and all the bite. Read more about them and other peppercorn types.

What a darling dish. Very simple ingredients yet big flavor. You got the cheese flavor, but it's not like eating mac & cheese.

The pepper Alton calls for though is pretty intense. The dish was super spicy. With a name like Cacio e Pepe it should be spicy, but I think a lot of people would be turned off with the amount of pepper used. It was too overwhelming for my wife.

What I recommend is staring with half the pepper he calls for, and see how you like it. In the recipe that I re-wrote below you will find me saying to use 1 tablespoon of pepper. he calls for 2, plus another ¾ teaspoon when served.

As I mentioned I made mine with all sorts of different peppercorns, but I expect most people to turn to the easy to find black peppercorns.

What I don't want you to ever do is used pre-ground black pepper. Just don't do it. You will be missing the key flavor that makes this dish if you do that.

Overall this is a great dish that can be thrown together in not too much time for a quick dinner. I definitely want to be a part of our regular rotation. 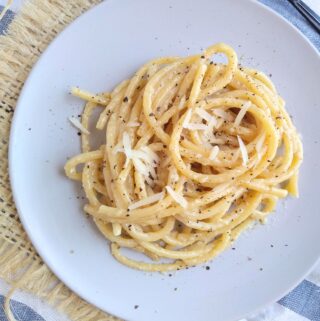 A simple pasta dish made with starchy pasta water, cheese, oil, and lots of pepper. The recipe was created by Alton Brown. I did cut the peeper in half because my wife and I thought it was pretty strong and I read reviews online saying the same.  I have written the instructions in my own words.
5 from 1 vote
Print Pin Rate
Servings: 4 people
Author: Alton Brown

The original recipe called for 2 tablespoons of salt. I have had people say they thought the dish was too salty, so I am recommending cutting that in half and starting with 1 tablespoon. You can add more if you like.
Tried this recipe?Mention @eatlikenooneelse or tag #eatlikenooneelse
« Costco Food Finds for December 2018
What are Lucy Rose Apples? »