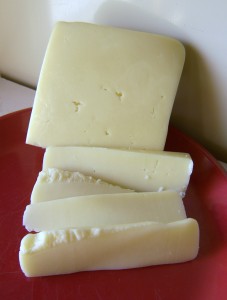 Farmers cheese is a good straight up eating cheese. It's nice on a cracker. It's a good choice for kids because it's soft and not too strong. I don't think it's a good cooking cheese as you want something with a little more punch.

As for the shelf life, I would eat it pretty quickly after you buy it. It's not going to last as long as an aged cheese. The cheese can be found in most grocery stores. You typically find it in the specialty cheese section, not with the standard 8 oz factory produced bar cheeses, although some companies do make a standard 8 oz farmers cheese, but it's not all that common.

My favorite farmers cheese is made by Guggisberg. Check out my review of their cheese.

« Why is Mint (Peppermint) Associated with Christmas?
Guggisberg Farmers Cheese »