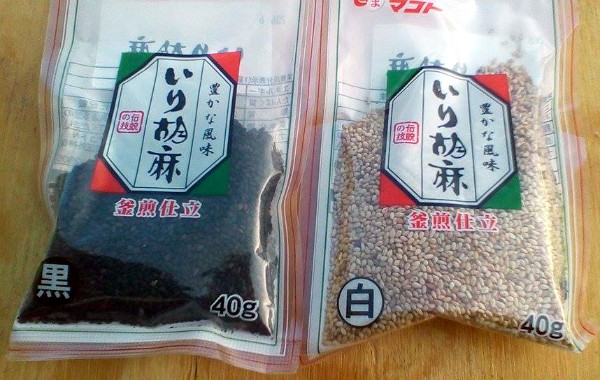 One of my favorite things to teach people on this blog is differences. To understand varieties of fruits, vegetables, seeds, etc and what makes them unique. I remember years back going into the grocery and being upset that I did not understand the different in apple varieties. Boy how clueless I was back then. I wouldn’t have had a clue what apple made the best pie or even which was one tart. That lack of knowledge has inspired me to really learn varieties. The other day I was wondering what the difference was between white sesame seeds and the black ones. I have heard people particularly seeking out the black ones. There must be a reason why they are doing so.

The Sesame Seed
A little background on the seed. It has been around for quite along time – over 3000 years. It is known for being a heavy producer of oils. It is grown in warm climates in places like Burma and India. They can be grown in the U.S., but we import than way more than we grow. Thomas Jefferson grew them at Monticello in Virginia! Most people encounter them on top of a hamburger bun from their local fast food joint. A lot of people may not know they encounter it in most of the hummus they eat. Traditional hummus is made from chickpeas and Tahini, a sesame paste, that is kind of like peanut butter.

The Difference Between Black and White Sesame Seeds
Most of us are use to the white sesame variety, however if you have not seen black ones before, keep a look out out for them. I did a taste test with both. Just popped some seeds in my mouth. I found that the black sesame seeds had a stronger, nuttier flavor than the white counter – like a white sesame seed with the volume turned up. You may find the texture is different as well as the black often come with their thin outer hull still attached unlike their white counterparts.

Uses for Black Sesame Seeds
You can use them anyway you use the “regular ones”. Although the black seeds may not look as nice on a bun as the white, they can produce a stunningly black ice cream. I found several recipes online for black sesame ice cream, such as this one from the blog, Spicie Foodie. That may sound strange but it produces a stunning black ice cream that would look lovely served along side a nice white vanilla ice cream.

Tip for Buying Sesame Seeds
Whenever you buy sesame seeds check to see if they are toasted or roasted already. If not, you will want to do that before using, to bring out their nutty flavor. You can put them in a 350 degree oven until browned or in a frying pan with a little bit of oil over medium heat until browned and you can smell them. Both are fairly fast, so don’t leave the room. Burning your white sesame seeds black is not what you are going for here.