Home » Thanksgiving » Buying a Turkey » What Type of Turkey Would Alton Brown Buy? 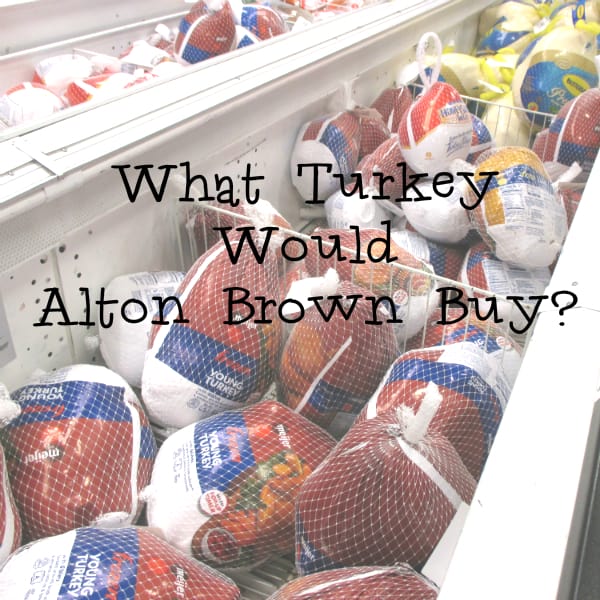 Myself and many foodies around the country have learned the most about turkey from Alton Brown. He is the King of Turkey as far as I am concerned. His classic Thanksgiving episode, Romancing the Bird, is as classic as any Charlie Brown holiday special. It is where I learn what brining was, how to use a probe thermometer, and that stuffing is evil (dressing not so much). If we are following his advice on how to cook the turkey (I always butterfly), might we also follow his advice on what turkey to choose.

In both Good Eats thanksgiving episode, Alton choose a frozen turkey. His biggest reason was they avoid the possibility of being mishandled. It’s easier for a frozen turkey to be maintained at the proper temperature without it thawing before you receive it.

What Size Turkey?
Alton does not recommend getting a dinosaur sized turkey. They take too long to cook, thus drying out the meat. He said go for two smaller birds as opposed to a larger one.

Here are the sizes of turkeys he calls for in his various recipes:

The 14 pounder seems to his most used size. He allows for a larger bird for smoking a turkey. The stuffed turkey is on the smaller size, so that the stuffing can cook to proper temperature, and so the meat stays moist (for those that must have stuffing in the turkey).

In the final Thanksgiving episode of Good Eats, Alton does recommend a pastured raised bird. These turkeys are allowed to roam, explore pastures, eat bugs, etc. Bottom line they are allowed to be turkeys. And that makes a difference in their flavor. I have experienced that myself in raising ducks. We allow them to free range around the property and the eggs they produce are superior in flavor than any other egg we ever had.

Finding a Frozen Pasture Raised Bird
This is a challenge. Most pasture raised turkeys are fresh not frozen. I did not find any here in Michigan that was both frozen and pastured raised. Trying doing a Google search for pastured raised frozen turkeys in your area and you may come up with some choices. I did a brief search and found some. Your most likely going to have to buy directly from the farm, but that’s not a bad thing to skip the middle man and support your local farmer.

Previous Post: « Are Fresh Turkeys Juicier Than Frozen?
Next Post: Why Use a Ricer for Mashed Potatoes »