Home » When are Fruits & Vegetables in Season? » Where to Find/Pick Gravenstein Apples 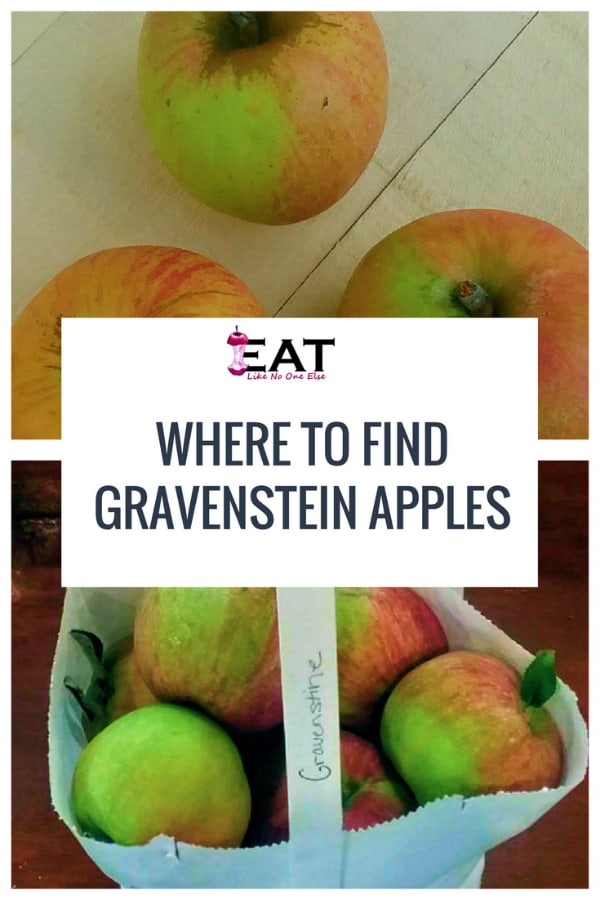 That moment you bite into a perfectly at it's peak apple after suffering through summer without any good apples to eat. Let me pause for a moment....ahhhhhh. My first good apple eating experience of the year comes with one of the best apples period. I speak of the Gravenstein apple The famous botanist and horticulturist, Luther Burbank is known for saying "It has often been said that if the Gravenstein could be had throughout the year, no other apple need be grown." He may be right about that. The Gravenstein is great for out of hand eating, makes a fantasic apple sauce, and apple juice. You can actually find products made from these apples at Trader Joe's and Whole Foods Market.

Want to experience this apple for this first time? Or is this an old friend that you have lost touch with? Let me guide you to where you can get your first or first in a long time bite.

The History of the Gravenstein

For this apple we got to go way back. Try the 17th century. Maybe even earlier. It was said to have been introduced in Denmark. Gravensteins eventually made it over to the "new world". There biggest time in the spotlight was in the 1st half of the 20th century. Sebastopol, California became the epicenter for Gravenstein's popularity. During World war II this was the apple that the troops ate in the form of applesauce and dried apples. It was so poipular than that even schools and streets were named after the apple!

When the apple industry began to struggle, the Gravenstein began to disappear. Trees were pulled up and replaced with wine grapes. Production of Gravensteins was drastically reduced. The only reasons we still see them is because of Slow Foods USA and the Gravenstein Apple Fair. Both have campaigned to "Save the Gravenstein" and I think they have achieved it.

If you are interested in learning more about heirloom apples, I recommend picking up the book "Apples of Uncommon Character: Heirlooms, Modern Classics, and Little-Known Wonders". It has some fantastic photos in it and you will learn about apples you never knew existed.

The Gravenstein and Slow Food USA

The Gravenstein apple is part of the Arc of Taste with Slow Food USA. Slow Foods describes the Ark of Taste as "a living catalog of delicious and distinctive foods facing extinction. By identifying and championing these foods we keep them in production and on our plates." Below you will find a video with more details about how the Gravensteins are being saved.

Every year there is a fair that goes on in Sebastopol in honor of the Gravenstein apple. The original Gravenstein Apple Fair began in the early 1900s. It was no longer celebrated during World War II. In 1973 it was re-started and still going strong to this day with live music, plenty of food, and of course plenty of Gravensteins.

The fair is the main fundraiser for Farm Trails. During a time when people were becoming less and less connected to their local food sources, Farm Trails created a map each year to show where various local farms were at. These were long before the days of the internet. You couldn't just look up farms in your area. It was an idea ahead of it's time. It help pioneer people getting to know where their food comes from and going to those local sources. 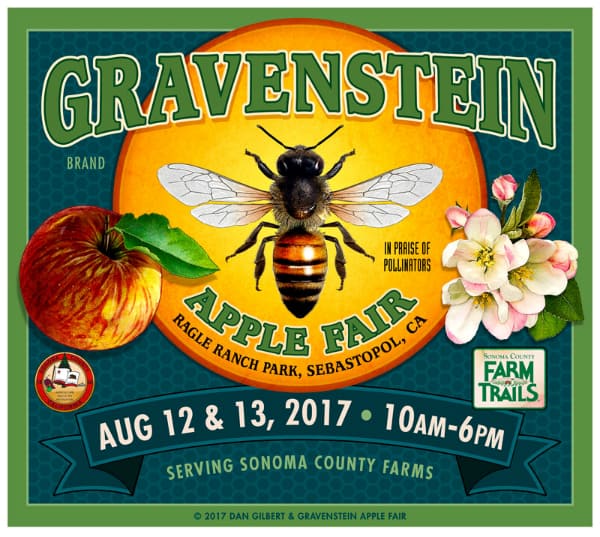 The 2017 poster for the Gravenstein Apple Fair.

One of the farms featured on Farm Trails as well as at the Gravenstein Apple Fair is Dutton Ranch. It's their apples that make their way into the juice and applesauce that Whole Foods and Trader Joe's sell. 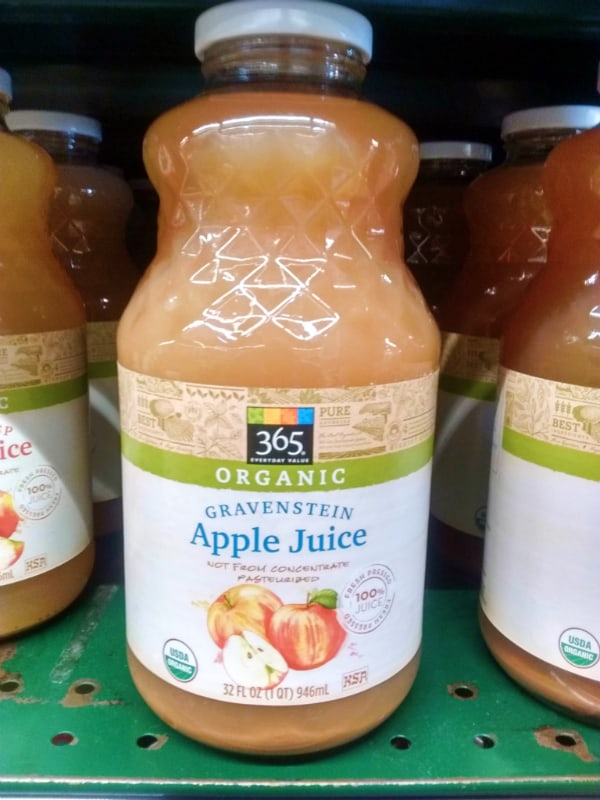 A bottle of Organic Gravenstein Apple Juice found at Whole Foods Market. You don't see a lot of varietal apple juices on the shelf. This one is definitely worth your attention. Your kids will never want you to buy the cheap stuff again.

There are a lot of disadvantages to growing the Gravenstein commercially. During a visit to Johnston Fruit Farms in Swanton, Ohio, I heard abut some of them. First, they said they have to pick them 5 times. You don't just to go to the tree and strip it of all it's fruit at once. If you did so the apples would not all be of the same quality and flavor. For large apple growers this is a really inconvenient for them. They don't want to send their crew back through the same trees over and over again - that costs labor (which equals $$$). Growing Gravenstein is more of a labor of love. 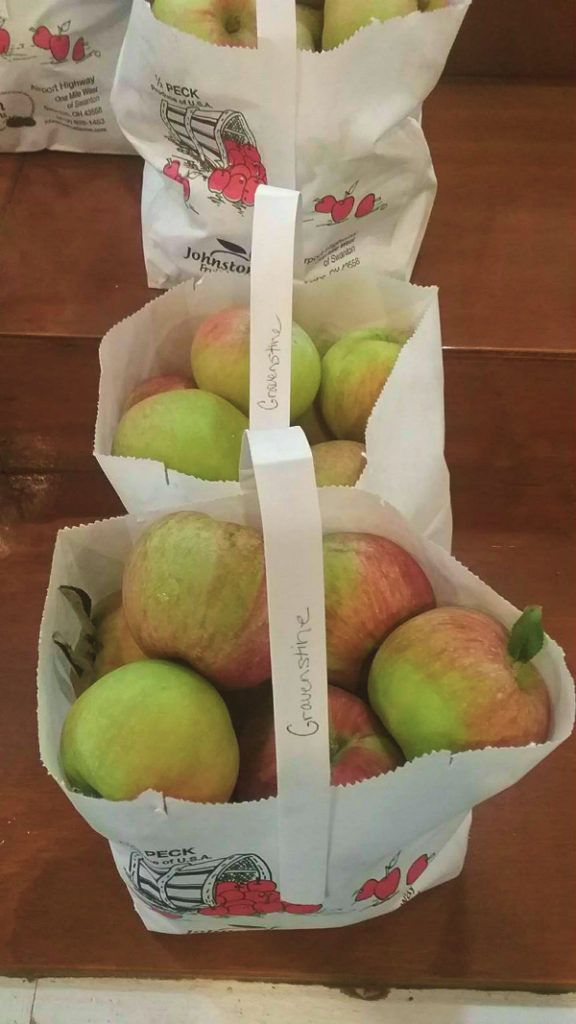 Another issue that growers and grocery stores don't like is a limited shelf life. Apples like Fujis and Galas can go into cold storage for months, even up to a year after they are harvested and still be considerable sellable - thought I doubt how good they are near the end of that time frame. Gravensteins only keep at best for a couple weeks. They tend to go soft, which is seen as especially bad considering customers keep clamoring for more crisp apples - thanks Honeycrisp 🙂

The Gravensteins I got while visiting Johnston Fruit Farms were the best I ever had. Picked with the perfect rich flavor, perfect sweet/tart balance, crisp enough, and plenty juicy. To show you the inconsistency not every apple I had in the bag was worthy of that glowing review.

When Do Gravenstein Apples Ripen?

In California they can go as early as late July. In other parts of the country, they are ready early to mid August. This timing makes them one of the first apples an orchard will harvest each year.

Where to Find Gravenstein Apples

Ok now onto what you are looking for. Below you will find my list of where to find Gravenstein apples. This is by no means a comprehensive list. If you know of a source that is not listed here, leave a comment below. I would especially love to hear from you if you grow this apple. Some of these orchards you can even pick them yourself.

Also note some of these farms grow the Red Gravenstein. This is what is called a sport variety. At one point a Gravenstein tree produced an apple that was genetically similar yet different than the other apples on the tree As the name would suggest these Gravensteins tend to be more red in color. They are also said to be less tart than the original. I would love to try them side by side to taste the difference.