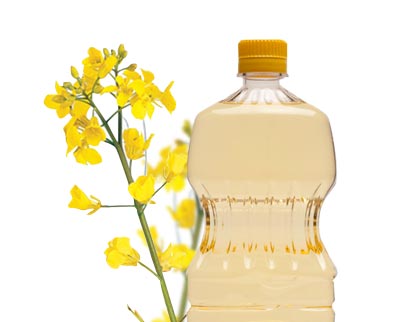 Oil - an essential ingredient to have in the kitchen. For a long time I have been using canola oil. It is cheap. Easy to find. It doesn't throw off the flavor off what you are cooking. However recently I decided to stop using canola oil. The main reason being the high likelihood that the canola oil I was buying was produced from Round Up Ready GMO Canola. According to the Non-GMO Project, 90% of the U.S. canola crop is genetically modified (in 2011). Canada also grows a lot of canola, but after watching the documentary "The Future of Food" I would not trust any canola grown in Canada.

So What's the Big Deal?
Whenever I can I want to avoid consuming a product that I can be 90% sure contains genetically modified ingredients. I believe that these ingredients are not good for our health, even in the face of the government and the developers that claim that GM products are safe. GM crops are so much apart of our diet nowadays it's quite the challenge to completely avoid them. In the case of canola oil, it's easy to switch over to another type of cooking oil.

Canola Oil Alternatives
First off you can avoid GMO oils if you purchase imported European oils. Europe does not allow GMOs. Two different types of cooking oil I have been using lately are grape seed oil and sunflower oil (from Europe just to be safe). Neither of these come from GM crop sources.

I wanted to try grape seed oil after I saw Robert Irvine use it extensively on the show, Restaurant Impossible. This oil has a delicate flavor that is perfect when you don't want your oil to overpower. The flavor is slightly nutty without overwhelming the flavor of say a salad dressing. It has a high smoke point of 421 degrees, making it a good for frying, sauteing, or any high heat cooking.

In the cholesterol battle, grape seed oil is on your side. It provides good cholesterol and is low in saturated fats. I also have to mention that it does contain some antioxidants. It is a source of Linoleic acid (Om-6) I would consider it a healthy oil option (of course still don't go overboard with it).

Below you will find a video on the making of grape seed oil. Sorry that the quality isn't the best.

The last time I bought this oil I got it at Trader Joe's for a reasonable price. The oil was from the Ukraine (they don't allow GMOs). Refind sunflower oils have an even higher smoke point than grape seed coming in at 450 degrees! While I don't think it's as healthy as grape seed oil, sunflower oil does contain it's share of vitamin E and is low in saturated fat, although the types of fats can vary depending on what variety of sunflower(s) are being used. Again consume in moderation.

Here is another video - this one shows sunflower seeds being pressed for oil.