How to make a tasty, full Christmas dinner in 2021 on the cheap from ALDI. Serve a ham, sides, and dessert and wow your guests with your frugelness with such delicious food.

Christmas is by far the most expensive holiday to celebrate. With all the gift giving going on, it might not leave much left in the budget for the Christmas meal.

That is why I am here to help by showing you how to make a full Christmas dinner on the cheap by purchasing what you need at your local ALDI store.

For this dinner, we are going to start off with the main course. And what feeds a group of people the cheapest? Why, a ham, of course!

I am going to show you how to make it super tasty too, with a few extra ingredients!

Here are the prices of ham at ALDI that I found on Wednesday, December 16th at the Laguna Woods, CA store.

The spiral hams were all sold out at the ALDI store I was in, so for now I am listed the price I saw them for in 2020.

This is the first year I have seen the carving ham. This is a boneless ham that is a flat shape similar to the one I get at Costco. It's not like one of those logs they smash together. The bone it removed. It's more expensive than the other hams but you do end up with 100% useable meat, so take that into account.

Let us know in the comments at the end if you found any other ham.

🧀 Make sure to check out our other ALDI Christmas post on How to Make a Cheese Platter.

The cheapest ham at ALDI is the Appleton Farms Butt or Shank Ham. It is going for 69 cents per pound. I found that the average ham weights about 8-12 pounds.

We have a family of 6, so a 10 pound ham would give us 1 ⅔ lbs per person. Even including bone we will have enough with some leftovers.

I love making my own glaze for a ham, even if it comes with one. This is Christmas after all? Here are ingredients to make a homemade ham glaze that will knock the socks off everyone at your dinner table.

Here are the amount are going to need. The rest can be saved for different uses later.

A recipe is posted at the bottom of this post.

🥕 Side Dishes for Christmas

I love pairing carrots with ham. Cooked carrots in my opinion are really underrated

For a quick, cheap, and tasty side, just cut the carrots into cubes or matchsticks. Saute in a pan with butter (the butter can be extra from buying it for making a pie) until browned.

Check your pantry for any additional spices you can use. If you have any of the following already give them a try: cumin, coriander, dill seed, fennel seed, and freshly grated nutmeg.

Another cheap option is Russet potatoes. They are the cheapest potatoes in the store going for $3.99 for 10 pounds, which at 39.9 cents a pound is a fantastic deal.

Want to save oven space on Christmas day? Try making mashed potatoes in the slow cooker. Just put the potatoes into your slow cooker with some water on the bottom so they don't burn, and cook them on high for 2-3 hours..

Russet potato skins are a little tough so you might want to peel them before hand.

When potato are done add in your milk ($3.39/gallon which only need a small amount of) and butter and whip them with a hand mixer. Leave them in the slow cooker on warm until it's time to eat.

This time of year Brussels Sprouts are my favorite veggie. To make them quick you can shred in a food processor. If not food processor chop them up as small as you can with a knife.

You can also add some mushrooms to the pan as well. Just slice the mushrooms and cook them all together with whatever other seasonings you have on hand.

How about a homemade pie for dessert. Making your own pie crust is not that hard and can be done with just a bag of flour ($1.39 for 5 pound bag) water, and butter ($2.49)

As for the filling, take advantage of the frozen fruit at ALDI and make a mixed berry pie. The frozen berries cost $3.49 for 12oz. I would get 2 bags for a whole pie. Then you will need some sugar as well and you can get that for $1.98 for a bag of Baker's Choice sugar.

Remember you will have extra flour and sugar leftover.

For instruction on how to make a homemade pie crust check out out post on Peach Pie. You can use all butter instead of lard and butter that recipe calls for and just use regular flour.

For your meal you have:

Not bad at all when you consider you will have possibly have leftovers and leftover ingredients.

Now let's get to that ham glaze recipe, I promised. 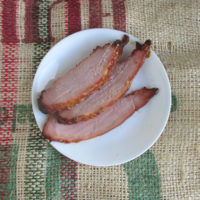