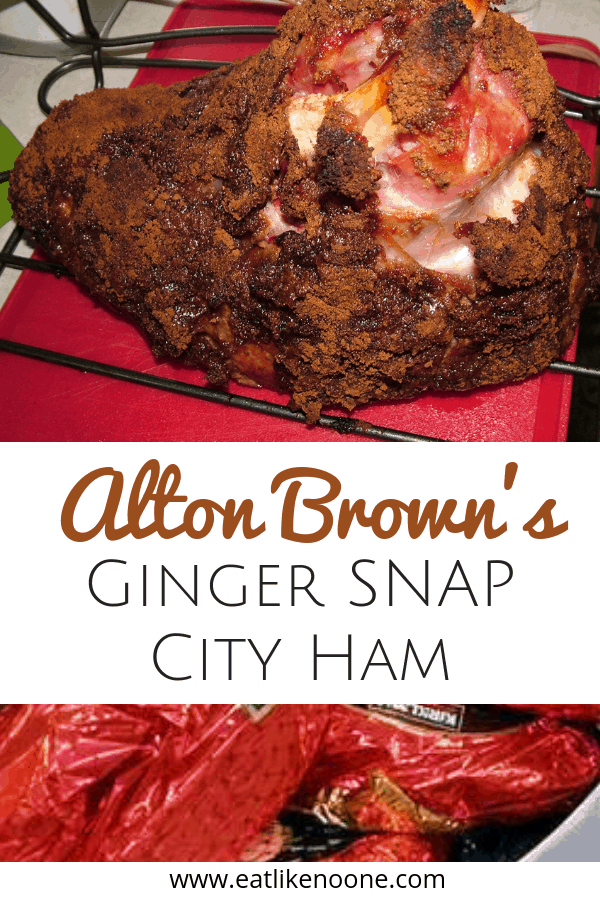 My first time ever cooking ham I wanted to try out a good recipe. One that would be different that what I have had before.

For Easter dinner back in 2010 I gave Alton Brown's recipe for city ham a try. It's been a tried and true recipe I have gone back to many a times. And even if I don't do the crust that same way every time, I always follow the techniques I learned from this recipe.

What is a City Ham?

In case you don't know what a city ham is, check out my post on the different types of ham.

The Crust for this Ham

Here are my notes from making this recipe.

1. I used a shank end city ham, like Alton picked out in the show. I have also tried it with a butt end ham, but (see what I did there), I prefer the shank cut as I think it's easier to carve in the end.
2. The only ingredient I left out was the bourbon spray. I found that my ginger snap cookies stuck to the ham really well without the need for any additional liquid. Of course if you wanted to add the flavor go right ahead.
3. The basting brush worked well to get the mustard layer on the ham. You can use regular yellow mustard or Dijon if you want. I do like the brown mustard pairing with the brown sugar and ginger snaps.
4. I used my probe thermometer to tell when the ham had reached 130 degrees, so I knew when it was time to put on the crust. The thermometer will also help you not overheat your ham.
5. We carved the ham up using an electric knife

, which made the job really easy.

The crust. The crust. Oh my goodness the crust. It made this ham truly the star of my Easter dinner and it has stared at Christmas now as well. My wife wanted to try this recipe because she isn't really into ham, but like the idea of the crust and now she asks for it! I didn't really have any problems with this recipe. It was rather simple and good.

The only downside at all is that the leftovers are not as good unless you reheat them in the oven as the crust will get soggy in the fridge. It's been fresh out of the oven for sure.

Disclaimer: This posts includes affiliate links. This means that at no additional cost to you, I will earn a commission if you click through and make a purchase. These are products and services I recommend because I use or trust them. Cookies will be used to track the affiliate links you click.