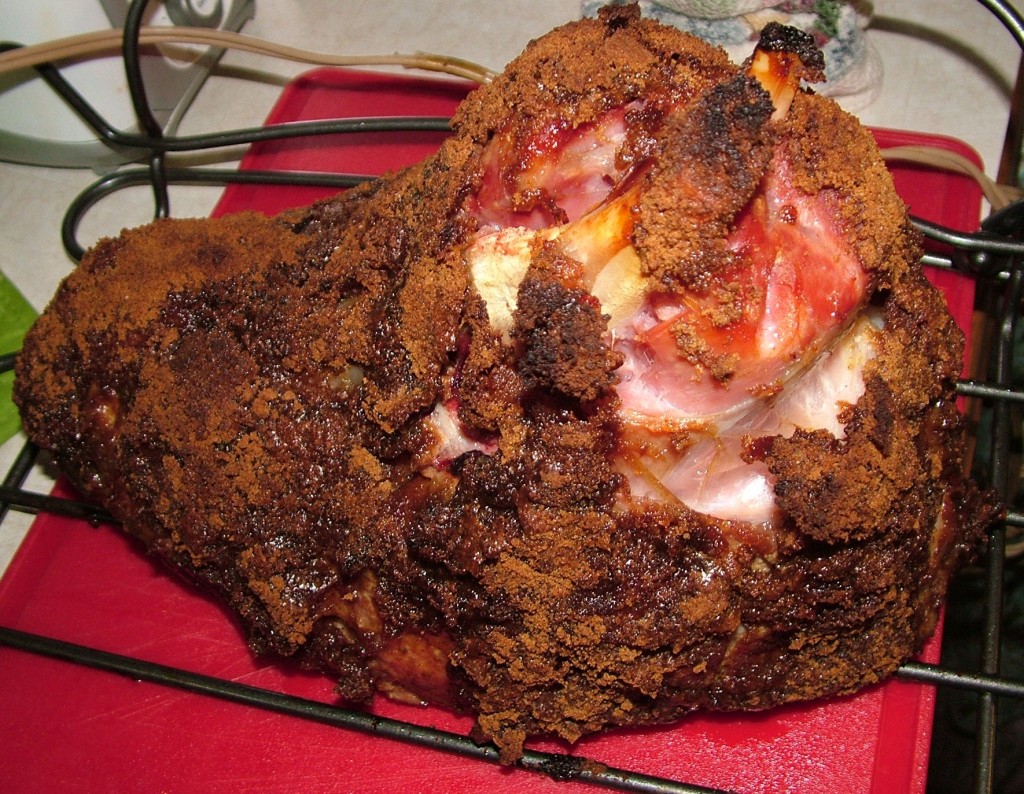 Ham – that popular chunk of pig that adorns many a holiday table, whether it’s Easter or Christmas. But not every ham has been created equally. The first thing you need to know about ham is where it comes from. Ham comes from the backside of the pig, hence it’s round shape. Just as on a cow, that area can be quite tough if not cooked properly. Cooking ham is a slow process that begins before you even purchase it. Salt and smoke are used to turn tough pig butt into something truly delicious.

A lot of what I know about ham comes from Alton Brown. In his episode “Ham I Am”, he explains the different types of ham. Every ham falls into one of two categories, country ham or city ham.

Country Ham
These hams are rubbed with a dry mix and let to hang dry for months. This process produces a complex flavor. The ham has to be soaked in water before you cook it. Country ham may not be easy to find. I have looked in a few stores in my area, and have not found a single one. So you will most likely have to turn to city ham for your Easter meal.

City Ham
(Click here to read my review of Alton Brown’s recipe for a city ham)
Instead of a dry mix, a sweet brine is used when this ham is cooked and smoked. This is what you will find on sale this week at your local mega mart. City ham can further be divided up into 4 groups. Check your label to find which one yours falls into.

If it says “ham and water product”, then you want to run as far away as you can from that ham. This means they can add as much water as they want and it can be boneless. The problem with a completely boneless ham like this is that something has to be holding it together without a bone. And whatever chemical is being used, your body probably would be better off without it. Also without the bone you are losing flavor to your ham and also the opportunity to use the bone in a soup later.

When speaking of city hams, I must bring up the sprial sliced hams. They are simply a city ham that has been pre-sliced. This is for your convenience. Any spiral ham I have had before has been dry. Cooking it pre-sliced like that, makes it really easy to dry out the meat. Skip the convenience (and pocket the difference) and the spiral ham, and slice it up yourself. An electric knife

What is the Difference Between a Shank End and a Butt End?
One other category to consider when ham shopping is unless you are buying an entire ham and most supermarkets only sell half a ham, then you need to know whether you want a butt or shank end ham? The butt end is what is sounds like, that half of ham comes from the top part of the ham cut, closer to the tail of the pig. The shank end is the end that is closer to the hoof. There is a lot of debate over which ham is better. Alton Brown choose a shank end and I did too for my Easter dinner. It seems to me that the shank end is easier to crave than the butt end. Some butchers believe the butt end has better flavor. And others argue back that it contains more fat and gristle. The decision is up to you.

What I Use When I Bake A Ham
Here are some tools that I use whenever I am baking a ham.
1. Roasting Pan

– You need something big to bake your ham in and a roasting pan is the perfect vessel. I don’t recommend not stick in this case as I always find that I still end up with burnt sugar in the bottom from my glaze. It’s harder to clean a non-stick pan without scratching it and ruining the non stick. So just go with an stainless steel that you can scrub easier.
2. Electric Knife

– Even thought hams come cooked most of the time, you still need to heat it up. Don’t trust the instructions that came with your hand, trust a probe thermometer to get your ham reheated to the properly temperature. I have had ham that has been overcooked, a dry ham is not something you ever want to experience.