Learn how to cook a spiral cut ham so that it's moist and delicious. No more dry spiral hams!

This blog post is sponsored by Dearborn Sausage Company.

One of the greatest disappointments in the kitchen has to be dry meat.

You spend a lot of your hard earned money on a big hunk of meat and it comes out with less moisture than the Mojave desert.

That has been my past experience with spiral sliced hams. Every time I have had one cooked for me I have not enjoyed it. The spiral hams of my youth were all dry and stringy. This has kept me from buying one myself.

The question to ask now is, why is this? Why does this happen? Is there anything I can do about it? Read on to learn how to prevent a spiral ham or any ham for that matter from drying out.

🌵 Why Is My Spiral Ham Dry?

The reason why anyone buys a spiral ham is that it is easier to carve, since it has been pre-sliced. The problem with that is it makes it easier for the meat to dry out. Juices can easily run of the meat and into the pan. This is the price for that convenience.

Another issue contributing to dry ham is that it is overcooked. Whatever spiral ham you buy is going to be a precooked ham, so it's really just about re-heating and if you are applying a glaze, cooking the glaze so it sticks to the meat. Something labelled a fresh ham that is not smoked would be a different topic all together.

🏆 Best Way to Keep Spiral Ham from Drying Out

There are two things you can do that will really beef up the juiciness of your spiral ham.

The first and most important thing to do is take the ham's temperature using either a probe thermometer that stays in the meat while it's in the oven and check using an instant read. A probe would be the easiest.

If you don't have a probe thermometer use the time guide that came with the ham, but it wouldn't be nearly as accurate. Those guides can't take into account all the other variables - like size and shape of meat, actual temperature of your oven, how clean your oven is (burned up junk in your oven can affect the cooking time).

The second key to a moist spiral ham is to wrap the ham with heavy duty aluminum foil to help keep the moisture in.

If you are planning to apply a glaze - homemade or a glaze packet - do so in about the last 15-20 minutes of cooking with the foil removed.

A bonus tip - cleaning your oven before cooking any big roast is always a good idea......as the thought "if only I had the time" goes through my head.

🌡️ What Temperature Do I Cook It To

If you are using a probe thermometer, place it in the deepest part of the ham without hitting any bone (the bone will throw off your reading). Then set the alarm to go off at 130 degrees if applying a glaze, otherwise let your ham go to 140 degrees.

As for the oven temperature, I prefer a low and slow method. 250 degrees will allow the ham to slowly heat up and do so more evenly.

Yes, I know that sounds low, but trust me on this. It took my 8-pound ham about 4 hours to cook. If you just can't wait that long you can raise the temperature but I highly recommend you do not go any higher than 350 degrees.

🍲 What to Cook It In

I have often cooked mine in a large roasting pan with a rack. But you can also do it in shallow roasting pan or if all you have is a baking sheet, that's fine too.

🖌️ What Can I Put on Ham to Keep It From Drying Out?

I have gotten this question before, people wanting to put something on the ham to keep it from drying out. Really it's all about not overcooking the ham.

Besides my recommendation of covering it with foil in the oven, anything else you might put on it is for flavor. A glaze isn't going to keep the meat moist if you overheat it.

❓ Can You Cook It in a Slow Cooker?

As I said earlier you want to go low and slow with heating up your spiral ham. So certain you could do that in a slow cooker, if your ham sits inside with the lid on.

If you are in the market for a spiral ham, may I suggest Dearborn's Famous Spiral Sliced Ham. Everyone I have talked to about them in Michigan knows who they are and their eyes light up and appetites increase when I mention them. Don't fear, thanks to the internet, you can order one of these delicious hams.

Dearborn has been around for over 70 years- three generations of knowledge of crafting quality meats. They know how to make a good ham. The last time we cooked one up, my wife and kids starting devouring slices the minute I was done taking photos.

Another way to quickly re-heat your ham is to do the re-heating in an Instant Pot or a pressure cooker. Learn more about that process by clicking here or tapping the photo above.

Below I have written out the full instructions on how to cook a juicy spiral ham.

I would love to hear back from you if you gave my tips a try and had better results. Leave a comment below. 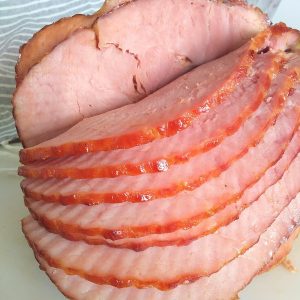 How to Cook a Juicy Spiral Ham

Instructions on how to cook a spiral ham so that it's not dry, but perfectly juicy.
4.46 from 75 votes
Print Pin Rate