Our recipe for the perfect glaze for the Kirkland Master Carve Ham. The glaze is a copycat of the glaze that use to come with the ham. Also a bonus glaze that is a brown sugar-Dijon mustard glaze.

Your comments came pouring in.

What happened to the glaze?

Oh Costco how could you take our glaze away? Ok, maybe not as dramatic as that last one sounds.

When they first came out with the Kirkland Master Carve Boneless Ham it came as a whole ham that has been carved off the bone. No one shaped it into an unnatural log shape like the traditional boneless ham.

This ham also came with a glaze - a red currant one. I prefer to make glazes myself but I used the one that came with it for review purposes.

It was a good glaze. Not too sweet. I wasn't a big fan myself of the dried currants that was in the glaze but nevertheless, still made for a tasty ham.

Sometime in 2016, Costco decided to get rid of the glaze and go to selling the ham in only half size portions. No problem, just buy two halves to get a whole ham. As for the glaze, I got you covered - so your ham can be covered in flavor!

Since I was cooking two ham halves at once, I thought why not do two different glazes at the same time. Glaze Number 1 is my interpretation of the currant glaze that Costco use to offer. Number 2 is a simple brown sugar-dijon mustard glaze.

Here is what you will need to make the glaze.

I went back to the ingredients that appeared in the red currant glaze Costco use to provide. That glaze included currant juice, dried zante currants, Worcestershire sauce, and a few other ingredients.

Since it's easier to find I choose red currant jam. The pectin in the jam would give the glaze some body. In order to balance out the sweetness, I added some white wine vinegar (you could use red wine for a more intense flavor).

I also decided to add some ground cloves. Cloves and ham are a classic combo. You often see some old school ham recipes with whole cloves stuck right into the ham. Pemba Cloves from Burlap & Barrel are my favorite. Buy them whole and grind them up yourself with a mortar and pestle.

RELATED - What Ingredients are Found in Ham?

Combine all the ingredients together in a sauce pan. Make sure it's large enough so that you can stir it without splattering the glaze all over your stove top.

You just need to heat it up, then set aside.

⏲️ When to Apply Glaze

In the last 20 minutes or so of cooking your ham is when you need to apply the glaze. This should give it plenty of time to setup without burning. If you are tracking the temperature of your ham, add the glaze when the ham hits around 120 degrees.

Remove it from the oven. Brush with the glaze and return until your ham is done.

If you have any leftover glaze, save it to add to slices when serving.

💡 Tip - The best tool I have found for applying glazes or brushing on any sauce is the Oxo Good Grip Silicone Pastry Brush.

If you want to try a different glaze - the simple combination of Dijon mustard and brown sugar. Add some ground ginger if you want to spice things up a bit. I like to make my own brown sugar so I can control how dark it is.

To make this glaze just mix together in a bowl:

Then apply the glaze as I directed in the red currant recipe. It is enough for one half ham.

If you like using ground ginger it's a nice addition to this glaze. I recommend Burlap & Barrel Buffalo Ginger - best ground ginger I have found.

Are you a super Costco fan? Then you got to join our email list. Every Saturday we send out tips about buying and cooking meat from Costco. 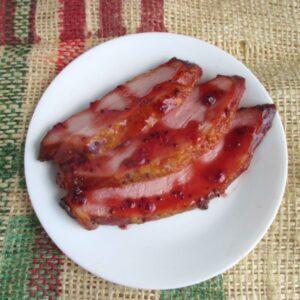 My replication of the red currant glaze that use to come with Costco's Kirkland Master Carve Ham. This glaze is enough for half ham with a little leftover to use at the table.
4.37 from 11 votes
Print Pin Rate
Prep Time: 3 minutes
Cook Time: 5 minutes
Total Time: 8 minutes
Author: Eric Samuelson