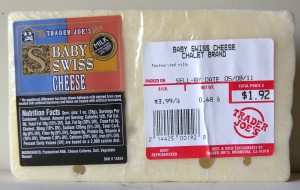 In the past I use to shy away from any cheese with the word swiss in it. Until I discovered baby swiss, which is a more gentle version of traditional swiss. Last week, I was looking for some cheese to go along with some homemade crackers I was bringing to a church gathering. I decided to stop into Trader Joe's as they have cheeses that are cheap in price but not in flavor. I picked up their raw milk cheddar and decided to give their baby swiss a try. I felt the contrast in flavors of the two cheeses would work well.

Trader Joe's Baby Swiss is probably the most mild of all the baby swiss I have had. But that isn't a bad thing. I liked this cheese. It's not as good as the baby swiss made by the company that invented it Guggisberg, but it's a nice alternative and the best one not labeled Guggisberg.