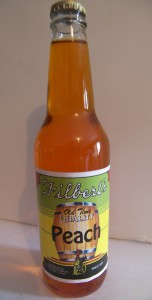 Since 1926, Filbert's has been making soda pop in Chicago, Illinois. Filbert's did not start off as a soda pop company. They originally were a delivery company, that delivers things like milk and coal to people's homes. They started making root beer during the age of prohibition and their root beer became very popular. Today they still make the root beer but they are also known for their selection of unique fruit flavored beverages like watermelon, peach, blue raspberry, blueberry, green apple, red raspberry, grapefruit, the most unique of all - banana (which I am thinking probably tastes like carbonated banana runts candy). I like to see companies branch out from the typical orange that every soda maker has to offer. I hadn't yet been able to try all their flavors, but so far I have had their watermelon and peach.

Filbert's Watermelon
I am not a big fan of watermelon itself, but I do like artificial watermelon flavor. Filbert's had that kind of flavor. It was better than the Jolly Ranch Watermelon I had before, but it still needed a little more of a kick to be a really good drink.

Filbert's Peach
It has a geniue peach taste with a little bit of tartness to it, like a peach would have. Again the flavor needed to be turned up just a notch in order to improve it's score.

Click here to check who makes the better peach soda: Nehi or Nesbitt's

You can purchase Filbert's sodas online from the Old 52 General Store. They have these flavors in stock: peach, watermelon, blue raspberry, and black cherry. They carry over 300 varieties of glass bottled soda that you can purchase online or at their store in Sabin, Minnesota.