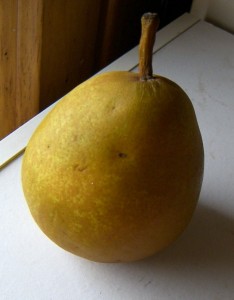 The name of a piece of fruit can have an effect on how we perceive it. Take the French Butter pear. That just sounds so gourmet. The name itself naturally raised the expectations of the fruit. I purchased a French Butter pear at Plum Market in Ann Arbor, Michigan. The pear appears to look like a Bosc pear with some green in it's color. It's shape is similar to the popular D'Anjou.

As expected the French Butter pear can track it's origins back to France. The pear is also known as Beurre Hardy (French Butter is easier to say!). It has been around since the 1800s. Today you can find them growing in California and Oregon.

Overall Feeling: This is a very flavorful pear, more complex than popular Bartlett. The flavor has a hint of lemon, which is nice. It has a good texture, not too grainy and is juicy. It melts in your mouth, kind of like butter! I would love to have more of these in the future. The complex taste would make it a good choice in cooking and baking applications.

More on Pears
How to Know When a Pear is Ripe