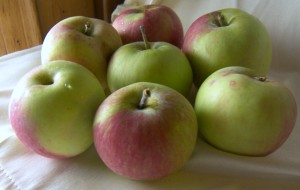 I love to search out old heirloom varieties of apples. The kind of apple that has been around for centuries and has a nice story behind it. These kinds of apples are not easy to come by. But when I can find a source, I try to get all I can from them. One of my recent searches, I came upon the Snow Apple. This variety was said to have originated in France sometime in the 1600s! Now that's old! It slowly made it's way from France to Cananda and then into the United States just before we declared our independence from England.

The reason it's called a snow apple is pretty clear once you cut into the apple. It has extremely white flesh. It is said to be an ancestor of a popular modern day apple with a pretty white flesh, the McIntosh.

Overall Feeling: It's a pretty tart apple at first that softens up and becomes less tart as time goes on. It has a decent flavor and is about average in juiciness. I don't think it would hold up in baking, but it would be a good applesauce choice.