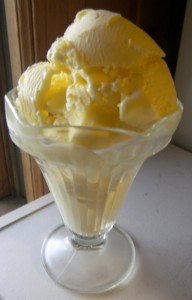 Chocolate, strawberry, vanilla - these are flavors of ice cream that you find pretty much everywhere you find ice cream. One flavor you might have trouble finding is sweet corn. Unless you were looking in my freezer right now. Yes I made sweet corn ice cream. Seems strange doesn't it. I was motivated to make this after watching an episode of the Cooking Channel show "Cook Like an Iron Chef". The show is hosted by Iron Chef Michael Symon. He picks one ingredient each show and makes it the star of several dishes. Now in the episode Michael also adds popcorn and caramel-candied bacon to the ice cream, but I just decided to try the ice cream all by itself. Here are my notes from preparing this ice cream. For the full recipe visit Cooking Channel's website.

1. The corn including the cobs are placed with the dairy. This is where the flavor will be imparted to the ice cream. So don't rush through this step. I took a little taste as I went along and it seemed like the flavor wasn't all that strong, but don't worry it will be before the mixture hits the fridge.

2. I decided to skip adding the vanilla beans or any vanilla whatsoever. I wanted to make sure the vanilla didn't overpower the flavor of the corn. Since I hadn't made this ice cream before, I didn't want to end up with a more vanilla tasting ice cream than a corn one. In the end I was happy with it, without the vanilla.

3. In the show, Michael puts the mixture over an ice bath to cool. Since I wasn't working with the time line he was, I just placed it in the fridge until the mixture was thoroughly chilled. I actually left it in overnight and churned it in the morning in a Cuisinart Ice Cream Maker

This turned out to be an uniquely delicious ice cream. Imagine frozen creamed corn. It had a real nice corn flavor without being too weird. It would be fun to serve this up to some unexpected guests who thought they were having vanilla ice cream.