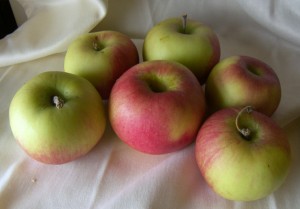 The farmer's market is the best source to find apples that you will never see at a grocery store. There are some varieties that I have only found one grower selling. But I have seen several growers at different markets offering the Red Free (or Redfree) apple. This red and green apple comes in a medium size. It was developed in 1981 by PRI (Purdue, Rutgers, Illinois Co-op). Growers like it because the skin doesn't display any browning (or russet). The apple is available in late August/early September, right as the heart of the apple season is beginning.

Why is this apple called "Red free"? It is definitely not free of the color red. The name "red" comes from the the red color that is found in the apple. Free in this case is believed to be referring to this apple resistant to disease, another thing that is appealing to growers.

Overall Feeling: The advantages I spoke of earlier for the growers is why I think this apple is grown. I don't think it's for it's flavor as it is nothing special. The apple is more tart than sweet, it's not really that juicy or that crisp. I think it's best use is for cooking, like making applesauce and good for those that like their apples more soft and tart. The apples do survive for a month or so in cold storage without rotting or cracking, which is better than some of the apples that come out just before it.