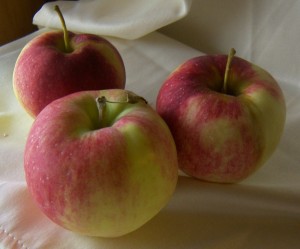 When the words "delicious" and "apple" are used together, people seem to have a reaction. Some think of the Red Delicious apple, which is pretty, but fails in every other category. Other think fondly of the popular Golden Delicious. These aren't the only "delicious" apples out there. Mollie's Delicious is a late summer apple that was introduced in 1966. While many people see this apple and think it's related to the Red Delicious, one of it's parents is the other popular delicious (Golden). It also has the Gravenstein apple (a popular juice apple) in it's parentage.

Mollie's Delicious trees produce rather large sized apples. These apples do well in cold storage, lasting up to 10 weeks. They may lose some of their crispiness over that time.

Overall Feeling: This is a nicely flavored apple, that is sweet, but not overly so. It's not the most crisp apple on the market, so if you must have the most crisp apple, you may want to look elsewhere. It's a nice out of hand eating apple, but would also work well in applesauce. I have heard some people cooking with these apples, but I haven't myself and so I don't know how well they hold their shape. If anyone has cooked with them, please leave a comment below describing your experience.