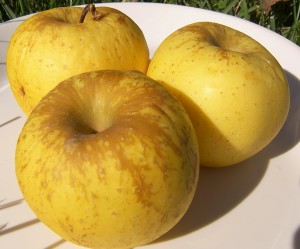 There is more to the golden apple world than the Delicious. One such example is the Golden Supreme, this apple appears on the scene before the Golden Delicious in late August/early September, which is about 2 weeks earlier than the Delicious. There is debate over where it originated. One source claims it was discovered in Clay County, West Virginia, and another some place in Idaho. Both of them agree the apple was created by chance.

Overall Feeling: When comparing this apple to a Golden Delicious I find that it is not as sweet or as flavorful. It is a bit sweeter than most of the apples I had that were harvested at the same time. I think this would make a good apple for applesauce. I heard that this apple is popular in cider making. In terms of crispness it's about as crisp as a Golden Delicious.