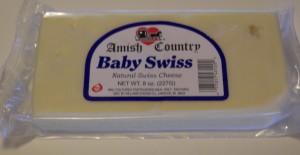 For those people who think swiss cheese is too strong, you need to try baby swiss. It is milder than the traditional swiss cheese, which makes it better for snacking. It looks a lot like any old swiss, but baby swiss has smaller holes, because it is not aged as long, which also explains the milder flavor. The holes are created through the breakdown of lactic acid and the giving off of carbon dioxide.

I purchased (at Meijer) some Baby Swiss made by Amish Country. They are a brand name under the Williams Cheese Company out of Linwood, Michigan. Their version of baby swiss was good, but not the best I have ever had. That honor would go to the baby swiss I sampled at Fromgination in downtown Madison, Wisconsin. Guggisberg Cheese is Millersburg, Ohio were the ones who invented Baby Swiss. Their founder, Alfred Guggisberg worked hard at inventing a milder swiss style cheese that would be better for the American market.

You can purchase baby swiss at most grocery stores. To get the original stuff you can visit Guggisberg Cheese or order some via their website.