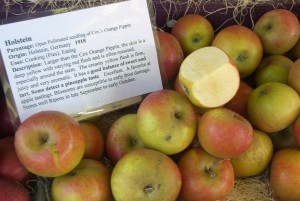 When we think of Germany in the first half of the 20th century, probably not a lot of good thoughts come to mind. But besides playing the villain during that time, Germany was the birthplace of a new variety of apple, called the Holstein. This apple is a late ripening apple that probably came from the popular European apple, Cox's Orange Pippin. I have heard that the Holstein has done well in apple tasting events, so I was looking forward to sinking my teeth in.

Overall Feeling: I have to say I was a bit disappointed. I was expecting more out of this apple. It's not a bad apple at all. It has a decent flavor, but not as flavorful as I was believing it would have. It is a sweet-tart apple that is a bit more tart than sweet. The apple was juicy, but not all that crisp. The apple will hold it's shaped when cooked, making it a multiple purpose apple.