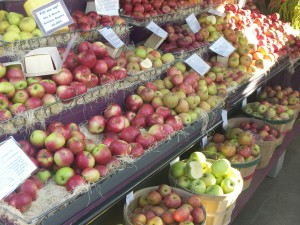 Produce Station will have not have these heirloom apples in 2012 due to the farm’s crop failure because of the April freezes.

One of the greatest thrills I have (I know I am a produce nerd) is when I go to a grocery store and find a new variety of some fruit that I have not tried before. I was really thrilled this past Sunday, when I paid a visit to the Produce Station in Ann Arbor, Michigan. They have sought our antique or heirloom apples to bring them to their customers. These varieties are over 100 years old! The neat thing about these older apples is back then people weren’t as concerned about what looked the best and what would sell in their stores, they carried more about what had the best flavor. And in the pre-fridge era, they also looked for apples that would keep a long time in their cellars, so some of the heirloom apples can last until the spring time.

Produce Station set up a brilliant display with information about each apple. It was a food blogger’s dream! They had 1/2 peck baskets ($9.99) and 1/4 peck baskets ($5.99) you could use to get a bunch to try or you could pay $2.99/lb. Below is a list of the varieties that I bought. I plan to do a review of each variety as I eat them. All the apples were Michigan grown. 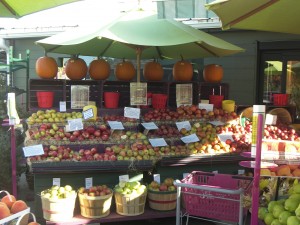