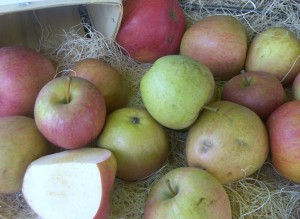 Sometimes you can learn something about an apple just from it's name. As is the case with Adam's Pearmain. A Pearmain is the shape of an apple that resembles a top or a pear. This particular pearmain apple originated in the United Kingdom around 1826. It is named after R. Adams of Norfolk. The parents of this apple are unknown.

Adam's apple ripens later in the season, around the end of September to early October. It has a good shelf life, keeping for 1-2 months. I attached a Youtube video below with some more information on this variety.

Overall Feeling: Woah, this is a tart apple. A good flavored apple, but very tart. It's not all that juicy, which seems to be a requirement for our modern apple varieties. It's flavor and tartness makes it a good choice for a dessert apple.