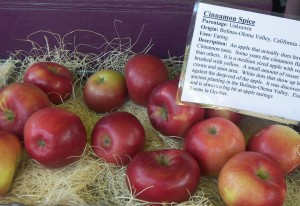 You may think by the title of this post that I am talking about some sort of cinnamon spiced apple dish. But I am actually referring to a variety of apple that is called Cinnamon Spice. It is suppose to have a cinnamon like flavor. It originated in Bolinas-Olema Valley, California sometime in the 1980s. The apple was discovered in some old trees. It is uncertain how this apple came to be, so we don't have any information on it's parentage.

The apple ripens in October and I have heard that it grows well in southern climates. The ones I purchased were grown in Michigan though. I purchased them at the Produce Station in Ann Arbor.

Overall Feeling: This is a very tasty apple. I did dedicate a spicy, cinnamon-like flavor, particularly in the skin. The apple was sweet with enough tartness so that it's not overly sweet. I highly recommend this apple for out of hand eating. I don't know how well it would hold up in baking.