There is nothing better than cinnamon and yeast together, unless it's a bread you can pull apart and maple is included in the icing!

Cinnamon. Put those 3 words together along with some other ingredients and you have my mouth salivating.

I am just love warm, yeasty, cinnamon bread. Cinnamon rolls have always been a fave of mine. I was very happy when my wife decided she wanted to try the Pioneer Woman's Pull Apart Cinnamon Bread a couple mornings ago.

In this case I sat on the sidelines while she prepared this wonderful bread. I thought I would interview her to tell us all about the recipe.

❓ Why did you want to make this recipe?

Traditionally my mother would make a delicious cinnamon sugar sticky rolls (dough balls rolled in butter and cinnamon sugar and then baked in a round pan) for Christmas morning every year when I was a child. I wanted to make something similar to capture those flavors for my children to enjoy.

I also have loved every single recipe of Ree's that we've tried, so I had good faith that this one would be a winner. The maple glaze seemed interesting, read below for how I felt about that!

❓ Tell us more about the process you used

Ree mixes her dough by hand in the same pot she uses to warm the wet ingredients. I decided to use my stand mixer with dough hook. That choice saved my arms, and I had more confidence that the ingredients would be well incorporated.

I warmed the wet ingredients in a saucepan and then transferred them to my mixer bowl and proceeded to use the mixer to add in the flour for the first and second additions.

I followed the recipe as it is written, except for the last addition of flour I had to add another cup of flour to get the consistency I was looking for. The dough was still very soft and sticky, but easy to roll out.

When stacking the squares into the loaf pan I was a little worried that they wouldn't look "pretty" when finished because they were slumping down, but they rose in the oven perfectly.

? Tip - If you want to make your bread looks super elegant, get one of the Pioneer Woman's loaf pans. Super pretty and make for an excellent presentation at the table.

❓ What was your biggest challenge?

The biggest challenge was stacking up the strips of dough, since they were very soft. But with a little help from my extra wide fish turner I was able to get them lifted and stacked. It was also unclear in the recipe if it was going to make 2 loaves or 1, but it turned out to make 2 loaves perfectly.

My favorite part about this bread is the maple glaze. I could just eat that by itself with a spoon...(well, I might have done that!) I would recommend a double batch of the glaze, to make sure every nook and cranny gets covered. Believe me, you won't regret it!

I love the addition of salt in the glaze, it gives it a salted caramel type of flavor, one of my favorite! The bread itself was soft and buttery, and the little crusty bits that caramelized between the slices were just like my mom's sticky rolls. It brought me a little closer to home when I miss her the most, at Christmastime.

❓ Is there anything you would improve or do differently next time?

I think next time I would cut the recipe in half. One loaf was enough for our family of 5 to have their fill for breakfast, and the leftovers were not gooey and soft like the first loaf was.

I'd like to try making the double batch dough and freezing or refrigerating half of it to see if it would work that way. Fresh is best with pastry, always.

Thank you Donna! The best part of the bread was the maple glaze for sure. I cleaned off the little spatula you see in the photos myself! The leftover bread left a lot to be desired, which I did of expected, but was hoping for the best. I did thoroughly enjoy it hot out of the oven.

Here is what you will need for this recipe

Her recipe called for maple extract, but we wanted to use syrup instead, so we did. I am from the midwest, so you got to have the real stuff.

You could also up the spice game with ground ginger, nutmeg, and/or cloves. Or you could dice up some apples real small and add them to the dough - that would be amazing. 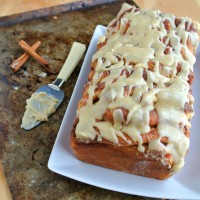 For the cinnamon sugar

To make the dough