Ah the sugar cookie, a classic Christmas treat. Houses across the country will decorate these delights this year. A lot of those households will turn to a pre-made mix to make their cookies. I recommend leaving the mix in the store and make them yourself. They are one of the easiest cookies to make from scratch. In an episode of Alton Brown's Good Eats, he teaches the viewer (and Santa Claus) how to make a great batch of sugar cookies, Here are some things I gleaned from this episode, which aired for the first time in December of 2003.

Alton uses the creaming method to make these cookies. This method involves mixing together the fat (in this case butter) and the sugar until they are well combined. Then you add the dry ingredients. Once the dough was prepared he split it in half. This is a good idea as it makes it easier to roll out later. It is also good for another recipe he does later in the show, more on that in a moment. The dough is then chilled in the fridge. This will help harden up the fat and is another way to make the rolling process easier. When it comes time for rolling, Alton uses a standard rolling pin with spacers on it. I use a French style rolling pin that doesn't have handles, which is a style he recommends in other episodes, so not sure why he returns to the standard one in this show.

One thing Alton does differently than most people is instead of using flour to keep the dough from sticking when rolling, he uses powdered sugar. This is so too much flour isn't incorporate thus making the cookies dry and hard. A great idea! Also before the dough is cut, he recommends placing it back in the fridge to chill it so it will be easier to cut. Only 10 minutes this time.

Now when it comes to cookie cutters, Alton says forget the metal. They bent and rust way too easily. This is one of the rare cases where plastic is better than metal. I like his idea of laying out all the cookie cutters on the dough first before cutting. That way you can get the most out of your dough, as too much re-rolling will lead to tough cookies.

As for frosting the cookie, Alton chooses a royal icing. This is made up of beaten egg whites, vanilla extract, and powdered sugar. To color the frosting Alton uses dry food color instead of the common liquids available at every grocery store. I have never seen the dry type at a grocery store before so you probably will have to either buy them online or visit a cake decorating store (I have a local one called Baker's Nook). 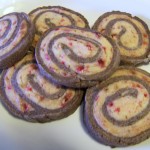 Finally Alton adds one more recipe to close out the show. Since I already have my own sugar cookie recipe that I like it was this next recipe that I decided to try out. He takes each half of the dough and flavors them differently to create chocolate peppermint pinwheel cookies. To learn more about this recipe, check out my detailed review of it.

Overall it's a fun Christmas episode featuring an unique Santa Claus and a cool recipe to transform the ordinary sugar cookie dough.