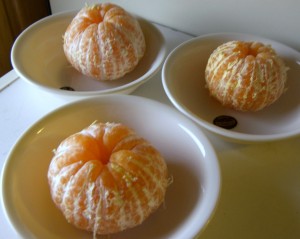 Mandarins have been increasing in popularity in the US, ever since Clementines became a big hit. One of the issues mandarin growers have been working on is having mandarins that can go to market later in the season. The peak of Clementine season is right around Christmas. The University of California-Riverside has been working on developing new varieties that are at peak during the spring. They have been very successful. Just this week, I discovered three new mandarin varieties at Whole Foods Market, they I have not seen in stores before: Tahoe Gold, Shasta Gold, and Yosemite Gold. These mandarins are currently joined in the store by Murcott and Golden Nugget mandarins. So here we are in late April, and I found 5 different varieties of mandarins in one store! I decided to take the 3 ones that were new to me and have a taste test with them. I found everyone one of them to be large in size, juicy, and very easy to peel. All three of these mandarins are a hybrid with it's parents being the Temple tangor, and Dancy and Encore mandarins. The peel does not cling well to the fruit, which makes them easier for peeling. This is an advantage of large, later season mandarins. Despite these similarities, taste wise they were all very different. Here are the results of my person taste test: 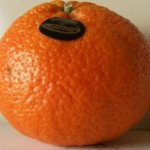 Yosemite Gold
This mandarin was sweet and slightly tart. I found one small seed in of the segments. The segments themselves had a tough outer membrane that once you get through, reveals a pleasant juicy, orange flavor. It said to contain 42% juice. It is also the largest in size of the three. The fruit is able to hold onto the trees until April. 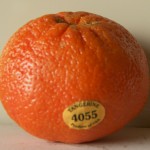 Shasta Gold
This mandarin is sweet with very plumb segments. Taste wise, they were the best of the three. They have rich pineapple-like flavor. Very unique in a mandarin. This is the one I going to buy again and again. I found no seeds whatsoever. The fruit can hold onto the trees all the way into May, making it the last of the three to disappear in stores. 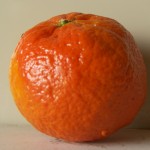 Tahoe Gold
This mandarin I found to be a bit chewy, which I did not find appealing. The flavor was slightly bitter, but not in an unpleasant way. I found two seeds in one of the segments. This was my least favorite of the three and would probably only buy again if the others weren't available. This one matures the earliest out of the three and doesn't hold onto the trees very well.