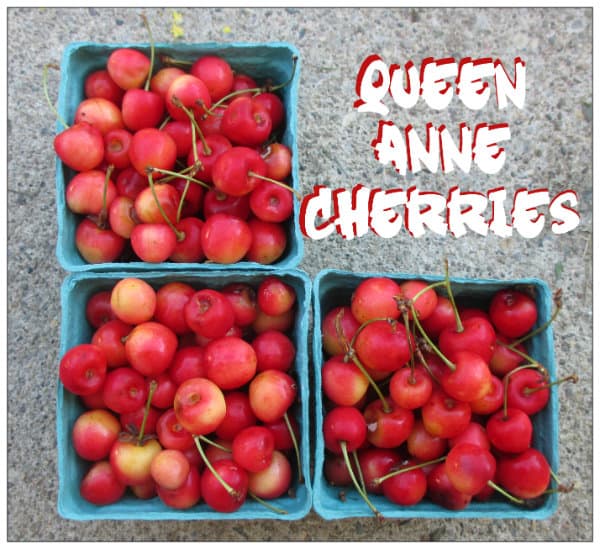 One of the more popular summer posts on my blog has been my post on Queen Anne cherries that I wrote back in 2010. That's like another life time ago in the high tech blogging world. I thought it was appropriate to do another one. I picked up some fresh Queen Anne cherries at the farmer's market the day before Independence Day. It's actually the first time I have had them since that original post 4 years prior.

Backcground on the Queen Anne Cherry

The Queen Anne cherry has been around for a long time. Before there was the Bing or the Rainier, Queen Anne was the "it" cherry. The "It' cherry has also been referred to as Napoleon, Napoleon Bigarreau, or Royal Anne. It at least goes all the way back until 1847. Queen Anne would fall out of favor over time. Demand for darker, firmer, sweet cherries increased. Gone to the point now where it is a hard to find a Queen Anne cherry - like I said I didn't seem any for 4 years.

When are Queen Anne Cherries in Season?

In some ways there might be two seasons. More on that in a moment. The fresh Queen Anne season comes in the summer. Queen Anne cherries ripen in early July in places like Michigan. A bit earlier in Washington and California. Generally if you are going to find them fresh look around the 4th of July. The season is not long lasting as by the end of the month they should be gone.

How Do Queen Anne Differ from Rainier Cherries?

Appearance wise they look a lot alike. But once you take a bite you will notice a world of difference. Queen Ann echerries have quite a bit of tartneess to them. Most people probably couldn't even stand them. However these kinds of cherries re the ones you want to bake with as they have that tartness you want.

How to Find Queen Anne Cherries

I have yet to find a grocery store that sells them as fresh cherries. The farmer's market is your best source to get them fresh. I have found them at several different markets here in Michigan. If you live in a cherry producing state, ask around at your local market, since if you can find someone growing them. I hear they sometimes are labeled as Rainiers or blush cherries in the store as that name is more popular nowadays than Queen Anne.

You can also find them canned year round from Oregon Fruit

using the Royal Anne name. Just check whether canned fruit is in your local grocery store, they are pretty easy to find.

« When Will Cotton Candy Grapes Be Available in 2014?
What are Skylar Rae Cherries? »