My all time favorite pumpkin pie is Alton Brown's. It has a delicious ginger snap crust.

Don't be shy with the spices!

Growing up I wasn't a huge pumpkin pie fan.

I had spend years eating pumpkin pies that came directly from a grocery store and certainly tasted like it.

Or if they were homemade several ingredients came out of a can.

I have never made my own pumpkin pie before so I was looking forward to trying this recipe to see if it would be worthy of a spot on the Thanksgiving menu. I can tell you that it has been on my menu ever since!

Here is what you will need to make Alton's pie.

As you will see in the ingredient list in the card below I have added ½ teaspoon cinnamon and ¼ teaspoon of ground cloves to the filling. I can't imagine a pumpkin pie without these. They are optional thought just not in my house.

Stauffer Ginger Snap cookies are my go-to. They are the best tasting ones with tons of ginger flavor and are perfectly crisp. They make for an excellent crust.

Alton forgoes the traditional crust in favor of one that combines crusted up ginger snaps with brown sugar, ginger, and butter. The crust was pretty easy to make. I love it. My wife prefer a traditional crust. Some years we will make two pies during the holiday season so that we are both happy.

The crust is easier to make than a traditional pie crust since you don't have to roll out dough. But that doesn't mean it isn't without it's pitfalls. In the above photo, you can see I tried to get the crust to climb up the pie pan but I had mixed results. The crust doesn't have the strength to hold it together like a dough pie crust. Fat is the only thing holding it together, you aren't creating any gluten. So don't worry if your crust is only adhering to the bottom.

Here are some of my top tips for making this pie.

My favorite cloves come from a single origin spice company called Burlap & Barrel. I also add a little bit of cinnamon (about ½ teaspoon).

You can make these into mini pies. Alton said that you could get 5 mini pies from this recipe. His pies were made in 5 inch pie tins. Bake time should be around 25 minutes. Again the pie should be jiggly in the center while set on the outside.

For a real modern twist on this recipe you try making individual sous vide pies in mason jars. I did and I absolutely loved it. It's more of an inverted pie as the topping goes on top after the filling is cooked.

Learn How to Make Sous Vide Pumpkin Pie - Based on Alton Brown's recipe.

Every year we make this pie and every year it gives rave reviews. Thanks Alton Brown for starting a tradition in our home. 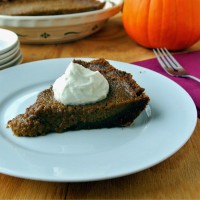 My favorite pumpkin pie recipe from Alton Brown with instructions written by me. I add more spices to my pumpkin pie that Alton doesn't - cinnamon and cloves. You could add ground ginger as well if you like but the crust packs a lot of ginger flavor itself.
No ratings yet
Print Pin Rate

To make the crust

To make the filling

Feel free to edit the amount of spices to your liking. The mix I included in this recipe is what our family likes. But if you don't want cloves, skip them. I always recommend to search out the best spices you can, it will make a huge difference.
Tried this recipe?Mention @eatlikenooneelse or tag #eatlikenooneelse
« How to Quickly Thaw a Turkey
Costco Turkey Prices 2021 »