The most amazing pumpkin pie you will ever put in your mouth does not come out of the oven but from a water bath. Sous Vide Pumpkin Pie always comes out with perfect texture, every time! The recipe is inspired by Alton Brown's Pumpkin Pie and Immersion Circulator Cheesecake recipes from Good Eats.

Nothing says dessert time at Thanksgiving like pumpkin pie.

Most people could not have a Thanksgiving without it even if that means resorting to buying a cheap store bought pie to make sure one was on the table.

Making pumpkin pie yourself for Thanksgiving from scratch including the crust is what really makes the holiday exciting. Your guests won't just eat the pie because it's there, they will purposely make sure to leave just enough stomach space to devour a slice.

I have been making a from scratch pumpkin pie every Thanksgiving since Alton Brown come out with his recipes on an episode of Good Eats. Sometimes I make it as the recipe calls for with a ginger snap crust and sometimes I make it with a traditional pie crust.

This year I am going rouge and taking my pumpkin pie out of the oven and putting into a Sous Vide water bath.

Here is what you will need to pick up for this recipe, starting with the filling.

I took the ingredients from Alton Brown's Pumpkin Pie and used the techniques from his 2019 Immersion Circular Cheesecake recipe from Good Eats : The Return. What resulted was pumpkin perfection - in a jar!

The filling from the original recipe is poured into 10 4-ounce mason jars.

Then you make the gingersnap crust.

The ginger snap crust is made, briefly baked, and used to crumble on top of the pie. This upside down approach gives you more crust flavor in every bite. And that is a beautiful thing.

You don't have to include the crumble if you don't want, you could just serve the pumpkin filling as a sous vide custard.

One thing to note, I always use Stauffers Ginger Snaps for this recipe. They are simple the best. As for the ground ginger, go with Burlap & Barrel Buffalo Ginger.

Here are some swaps in the recipe that you can do:

🍴 How to Make Filling

Let me take you through how I made these single serving pumpkin pies.

It all begins with 16 ounces or 1 lb of pumpkin puree.

To make sure that the puree isn't too watery, it gets placed in a pot and put over medium heat for a few minutes until it has thickened up some.

Half and half, spices, and salt are added to the pumpkin puree. You then remove it from the heat before adding the eggs and egg yolk.

Give the pumpkin mixture about 10 minutes to cool before adding eggs, so that you don't scramble the eggs.

Combine the brown sugar, eggs, and egg yolk. It's easier to incorporate the sugar by doing this step.

Then the eggs/sugar mixture can be mixed in with the pumpkin puree/half and half. The filling is then ready.

🥄 How to Fill Jars

For filling the mason jars with pumpkin pie filling I put the entire mixture into a 32 oz mason jar and attach my Ergo Spout.

The Ergo Spout fits on any regular sized mason jar and makes it very easy to pour any batter without spilling. It's also great for pancakes and crepe batter. Or use it for salad dressing. Check out my review of the Ergo Spout and all the ways you can use it.

The filling was enough to fill up 10 4-oz mason jars, thus this recipe will serve 10 people.

When I fill the jars I fill them up to about where the ring would touch on the outside as seen in step 5.

Put the lids on and just tighten the rings fingertip tight. You don't want them on super tight. Fingertip tight is enough to keep the water out and let air escape. When you put them into the bath you will see some bubbles. Don't worry that's normal.

The best way to get the jars in without touching hot water is using a pair of canning tongs - the same thing you would use if you are canning jam or fruit.

What I do to make this recipe is attach my circulator to the side of a large stock pot. Get that water bath going and then add the jars. You don't need anything fancy, use what you have.

⏲️ How Long to Cook?

In the Good Eats episode featuring the pumpkin pie, Alton says that the pie is done in the oven when it reaches an internal temperature of 195 degrees in the center. So that is what I set the Sous Vide to.

Cook them for one hour.

When you remove allow them to cool before attempting to open them.

Ginger and pumpkin are made for each other. I really like Alton's Gingersnap crust - that is in his case I am calling a crumble. You just need to sprinkle it on top when serving the pies.

The crumble is super easy to make. Just put 6 ounces of ginger snaps cookies into the food processor. Process them until they are completely crumbs. You may have to pulse a few times to get any big chunks.

Add in the ground ginger and then add melted butter. Process to combine. It should look like step 8.

RELATED - If you want some more inspiration for single serving desserts, check out our recipe for Apple Pie in Ramekins.

This is the perfect recipe to make ahead. The pie is actually better the next day. Once cool, place them in the fridge. Add the crumble topping when it's time to serve. You can also put some heavy cream, sugar, and freshly ground nutmeg into the bowl of a mixer and whip some up whipped cream to go on top.

Here is what I serve for the meal on Thanksgiving day. 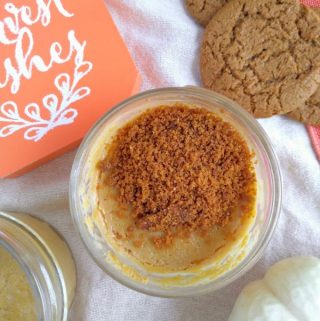 How to Make the Filling

To make the Ginger snap crumble