Have you ever had this problem - you wanted to make an apple pie (or your daughter was asking really nice for you to make one). You wanted to test out different apples in the pie but didn't want to mix them up. While pretty much everyone doesn't have this problem, a food blogger does. I wanted to do my own personal testing of how some apples held up in baking. I didn't want to bake several huge pies to test these apples out. So instead I thought small - mini pies made in ramekins. A nice single serving which no additional dishes needed to serve them up.

The apples I used this time around in my test were Gala, Blondee, Cox's Orange Pippin and Ribston Pippin. The last two I got in a shipment from Frieda's Produce. Both of these are heirloom varieties. Other varieties you can use include: Honeycrisp, Jonathan, Granny Smith, Rhode Island Greening (my favorite for pies), Northern Spy, Empire, and Ida Red.

All of the apples I used this time around held their shape well. The Cox's Orange Pippin baked up the softest but not too soft, my wife liked that texture. Galas are just too sweet in my opinion for baking. Yes they held their shape but the pies baked with those lacked acidic to round out the flavor. Blondee is a relatively new yellow apple are related to Galas but have a better flavor with a floral quality. These had a little more acidic which made them a better choice. The Ribston Pippen was the most acidic one I baked with on this occasion. It worked just fine. Not as well as my favorite baking apple - Rhode Island Greening which actually taste better when baked.

You can pick whatever pie crust recipe you like. I personally am a fan of Alton Brown's Pie Crust. It uses both butter and lard for a nice one-two punch of flavor, tenderness, and flakiness. I found that baking these small pies made for a more delicious flaky crust!

I used 5 inch creme brulee ramkeins that I got from Cost Plus World Market I could get 3 mini pies out of 1 pie dough recipe, with having to re-roll the dough out once.  You can also buy a set that comes with a torch 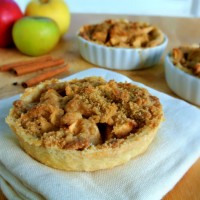 To make the topping

Tried this recipe?Mention @eatlikenooneelse or tag #eatlikenooneelse
« Where Can I Buy Organic Heirloom Apples?
How to Make Your Own Peach Soda Pop »